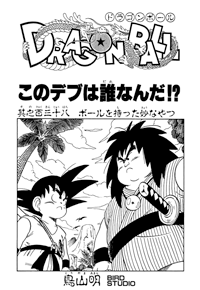 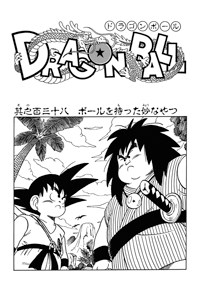 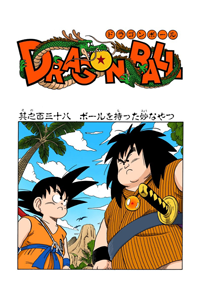 The Strange Guy With the Ball

Goku thinks this awesome fish looks like a dream. He jumps up on it and starts eating it, until only the skeleton is left, and his belly is inflated like a balloon. He’s feeling good now, and he runs over and punches a huge rock, putting a big hole in it. He’s full of strength now, ready to go get that monster again, and he calls for Kinto-Un. But Kinto-Un doesn’t come, so it must really be destroyed this time. Goku is really angry again, because now it’s killed two of his friends.

Goku pulls out the Dragon Radar, and it says there is a Dragon Ball right around here. Goku thinks that guy must be somewhere around here, just as a big boulder comes flying at Goku. But Goku jumps over it, then jumps up on top of the boulder, and tells the “monster” to come out. A fat guy with shaggy hair, a sword, and the One-Star Ball hanging from his neck comes out, asking what he means by this “monster” business. The man is annoyed about him eating his fish, and Goku hadn’t realized it belonged to someone, thinking it just dropped down here. The guy says he’s an idiot for thinking a roasted fish would just drop down, and Goku hops down off the boulder.

Goku notices the man has a Dragon Ball around his neck, although he’s not close enough to notice it only has one star, and thinks it’s his Dragon Ball. He thinks this guy must be in cahoots with that monster, so Goku asks him where the guy with the wings is. The guy insists he’s not telling the fish thief anything. The two exchange insults, and then they charge toward each other. Goku blocks the man’s punches, until he headbutts Goku and knocks him down. But then Goku jumps up and headbutts the man back, and he reels a bit.

The guy kicks at Goku, but Goku sidesteps it and punches him in the face. Then Goku kicks him, and he crashes into a nearby mountain. He gets up and dusts himself off, then they stare each other down, wondering about the other. Goku finally notices the Dragon Ball the guy has isn’t his Grandpa’s, and asks about it. The guy says he picked this up three years ago, and Goku apologizes for his mistake. The guy is still annoyed about his fish, though, since it was his breakfast. Then Goku spots something flying their way, and thinks it’s that monster again. But actually, it’s Cymbal, not Tambourine. Cymbal asks if they happen to know where a tiny ball with stars on it is. 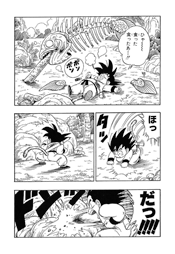 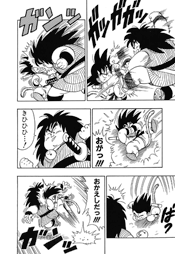 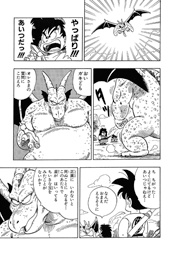