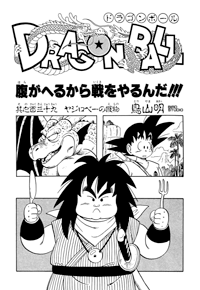 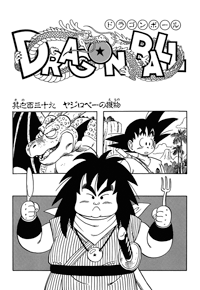 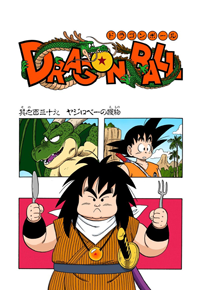 Goku has realized this is not the monster from before, and Cymbal notices the other guy has the Dragon Ball for this area. Cymbal tells him to hand it over, and so Goku thinks this monster must be on the same side as the other one. The guy doesn’t want to, and so Cymbal decides he’ll have to take it from his corpse. Goku insists that he gets to beat up this monster, but the guy won’t let him. Goku explains about his friend getting killed by this monster’s ally, but the guy says this monster’s going to be his spoils. So, they have to Rock-Paper-Scissors for it. And the fat guy wins.

He rushes at Cymbal, and punches at him, but Cymbal jumps over it and whacks the guy in the face with his tail. Then Cymbal punches the guy, sending him flying and knocking him down. Cymbal thinks he’s won, but the guy easily gets back up, saying this has been a weird day. The guy intends to eat this monster, and he jumps up and kicks Cymbal in the face. Angered, Cymbal holds out his hand and shoots off some electricity.

The guy is really annoyed about this strange lightning. So, he rushes at Cymbal again, pulls out his sword, and, slice! In the blink of an eye, the guy cuts Cymbal in half. Piccolo feels Cymbal’s death up in the airship. The guy is roasting Cymbal’s corpse over the fire, and then he decides to taste it. Yummy! Once he’s finished eating, Goku asks the guy his name, but he wants to know his first. “I’m Goku. Son Goku.” The guy says he’s Yajirobe, a monk. 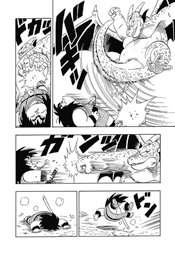 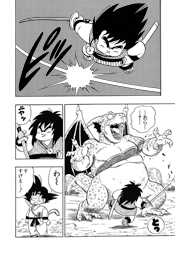 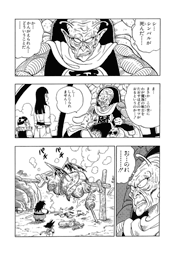