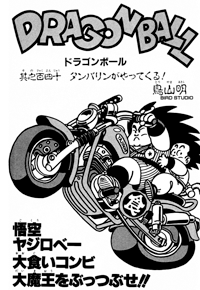 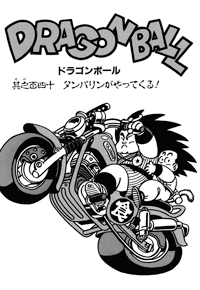 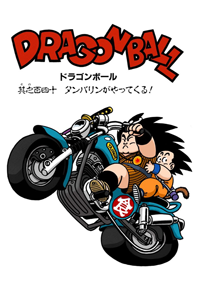 Piccolo is very pissed, and decides he’ll call on Tambourine to kill the person who killed Cymbal. Tambourine just happens to be busy kicking Giran’s ass right now, outside a little cave in a mountainous area. Two pandas are watching from the window in their house, and can’t believe this guy can beat up Giran. Giran tells Tambourine he doesn’t know who he’s messing with, and threatens Tambourine with his next attack: Guru-Guru Gum! Giran spits out the sticky stuff, tying up Tambourine. Giran asks how he likes that. “How is it, you ask?” Tambourine easily breaks through the stuff, and Giran can’t believe it.

Now Tambourine is going to get back to work, and he flies over and puts his arm through Giran’s stomach, killing him. Then he licks the blood off of his hands, and tears up the Giran poster. That’s six down, and the next poster he has is… Yamcha! Tambourine flies off to get him, when Piccolo contacts him telepathically. Tambourine tells him how he’s already done in six, but Piccolo doesn’t care about that. Piccolo explains to Tambourine that Cymbal is dead, so he needs to go to point WSC-2933 to get his killer. Pilaf thinks Piccolo’s weird for talking to himself like this, but Mai explains that it’s telepathy. So, Tambourine changes directions, toward Goku and Yajirobe.

Yajirobe says that still wasn’t enough, and Goku tells Yajirobe those guys are sure to come back for his Dragon Ball. Yajirobe tells him he’s supposed to say to “Yajirobe”. Goku says his voice sounds a lot like his killed friend Kuririn’s, and Yajirobe yells at him that he just said not to say his name that way. But then Yajirobe thinks this “Kuri-Whatever” dude must be pretty cool to have a voice like him, and asks if they look alike, too. Goku says Kuririn didn’t have a nose or hair, and Yajirobe thinks he must be some kind of freak.

Goku tells Yajirobe that he must have that Dragon Ball so he can return Kuririn to life, and Yajirobe wants to know just what this ball does. But then they spot Tambourine up in the sky before Goku can explain, and Yajirobe’s excited at the thought of eating again. Goku says it’s unmistakable this time, he’s the one who killed Kuririn and Kinto-Un. Goku calls Tambourine down, and Tambourine recognizes the pissed off Goku. 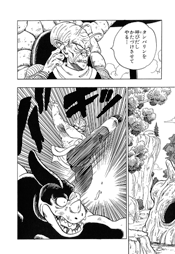 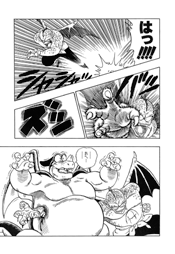 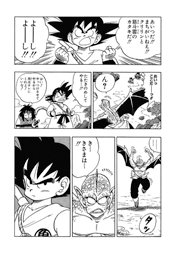