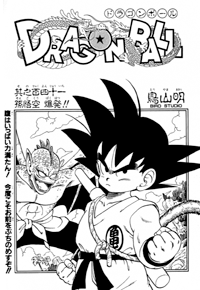 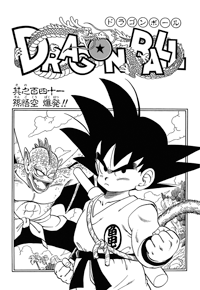 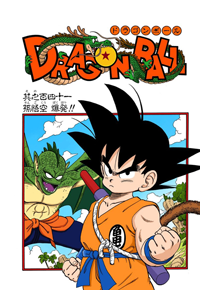 Tambourine can’t believe he’s still alive. “Kuririn’s enemy!! Kinto-Un’s enemy!! On top of that, you stole my Dragon Ball!! I absolutely ain’t gonna forgive you!!” Yajirobe tells Son to let him eat this monster if he defeats it. Tambourine can’t believe Cymbal was defeated by this clumsy “shit brat”, and thinks he must want to die if he wants to fight him again. Goku says it is different this time; his belly’s all filled up. Tambourine wants to see just how different he is. Goku thinks of Kuririn, and Tambourine yells at him to come on, asking if he’s just talking crap again.

Goku charges toward Tambourine, and then surrounds him with a bunch of afterimages. Goku elbows the confused Tambourine in the face, and then starts pounding on Tambourine, and finally he punches Tambourine off. Goku rushes after him, jumps up, kicks off a rock, and comes down, kneeing Tambourine face first into the ground. Goku stands over him holding the peace sign, but then Tambourine gets back up, pissed. He can’t believe that they, the Demon Clan, would lose to a mere human, then fires off a mouth blast at Goku.

The spot where Goku was standing is empty, and Tambourine starts to celebrate. But Goku’s just behind him, and is going to get him on behalf of Kuririn and Kinto-Un. Tambourine flies off scared, so Goku grabs the Nyoi-Bō and extends it really high, taking Goku high up into the air. Then Goku jumps off and fires a Kamehameha when he gets near enough to Tambourine. Up in the airship, Piccolo feels that Tambourine has also died. Piccolo decides he’ll have to go down and take care of things personally, while Yajirobe chews out Goku for not leaving any of that monster behind for him to eat. 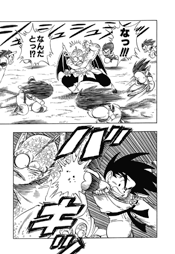 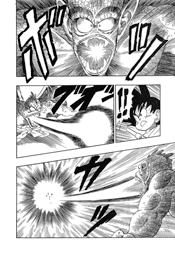 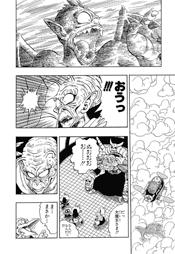