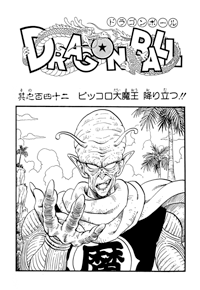 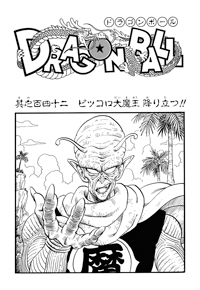 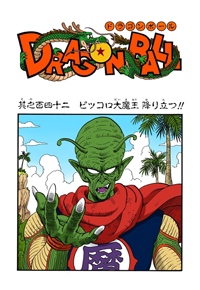 Piccolo is seriously pissed as the airship heads toward the One-Star Ball’s location. But Pilaf notices on their radar that four balls are together and moving, meaning someone else is gathering the Dragon Balls. That someone is actually Tenshinhan, Chiaotzu, and Kame-Sen’nin, who are flying around in a little plane. Tenshinhan wonders if the fifth Dragon Ball they’re heading toward might be the one Piccolo’s henchman took when he killed Kuririn. Kame-Sen’nin says fighting Piccolo is no good, so they’ll use the Dragon Balls to have Shenlong destroy Piccolo, then revive Kuririn and everyone else in a year.

Tenshinhan then suggests the Mafūba, but Kame-Sen’nin insists that’s ridiculous; even if they did it, Yamcha would be the only one left in this world. Meanwhile, Pilaf is freaking out about these others, but Piccolo isn’t worried. Those guys can’t do anything so long as they have the Four-Star Ball, so they can go avenge Cymbal and Tambourine until those guys bring the other balls here.

Goku checks the radar, as Yajirobe says he’ll give him the One-Star Ball if he beats up another monster and brings it back for him to eat. The radar says the next ball is very close, and the two of them look around, and finally spot the airship is up above them. An announcement that Demon King Piccolo has arrived comes over the speakers, but Shuu pressed the wrong button. This time, the message plays outside of the airship, and Goku realizes that must be the monsters’ boss. Yajirobe thinks the name “Demon King Piccolo” sounds familiar, and then he remembers where he’s heard it… He quickly gives Goku his Dragon Ball and turns to leave. Goku says this guy might be really yummy, but Yajirobe insists he’s quite full now.

Yajirobe scurries off, as Goku puts on the One-Star Ball necklace and prepares for the monsters’ boss to come down. Pilaf, Piccolo, and everyone else look over the edge of the airship, and Pilaf decides to take a look at who this person is with some binoculars. Pilaf freaks out when he sees, and explains to Piccolo how this brat always got in his way, and he’s really strong for a kid. Piccolo is going to get this brat who shamed the Demon Clan, with his Demon Magic.

Piccolo hops down from the airship, quite a ways down, and he finally comes face to face with Goku. Goku asks if he’s the boss of the guy who killed Kuririn and stole his ball, and Piccolo says he is, then compliments Goku for having defeated two of his warriors. Goku says he’s going to defeat him as well, and get his Dragon Ball back. Piccolo just laughs about this, and tells the “shit brat” he’s like ant crap. Goku charges at Piccolo, calling him slug crap, as Yajirobe watches from behind a tree, thinking Son’s dead. 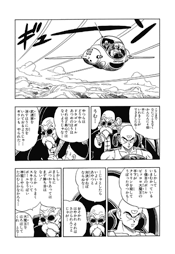 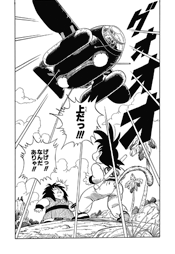 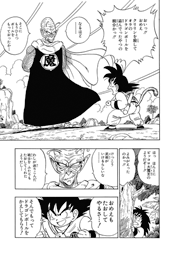