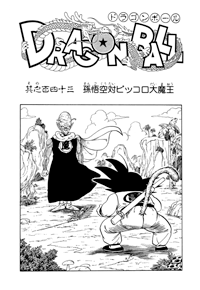 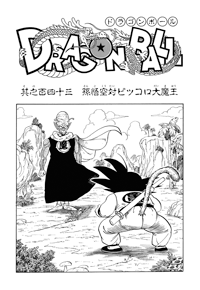 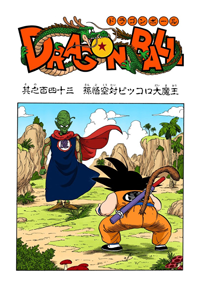 Pilaf looks down from the airship, and tells Mai and Shuu they should run away. The pterodactyl-looking guy tells them to not freak out and have a little more faith in Daimaō. Piccolo is going to get serious now, and he throws off his fancy cape thing, leaving just a regular dōgi outfit. Piccolo says he’s going to show him just how fierce he really is, but Goku’s not worried. Piccolo then quickly charges at Goku, and he kicks Goku high up into the air. Piccolo follows Goku up there, and punches Goku straight down into the ground, or rather, through the ground.

Piccolo comes down and pulls Goku up out of the hole, and holds him up with one hand, then punches him in the face with the other. Goku’s really busted up, but he still manages to bite down on Piccolo’s finger, so Piccolo tosses him to the ground. But Goku staggers back up, amazed at this guy’s strength. Piccolo tells Goku there’s nothing left for him but death, while he still has half of his power left.

Piccolo laughs, asking what he’ll do now, and so Goku puts his hands together in Kamehameha formation. Piccolo freaks out, but once Goku starts calling out the attack, Piccolo is relieved it’s not the Mafūba. Goku fires it off, and it’s a direct hit. But… When the smoke clears, Piccolo is completely unharmed. Goku is worried, while Piccolo laughs and asks if he’d like to die slowly. 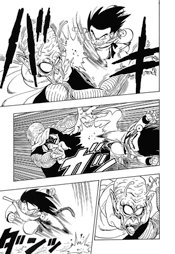 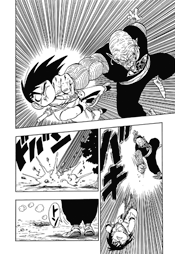 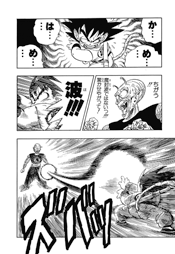