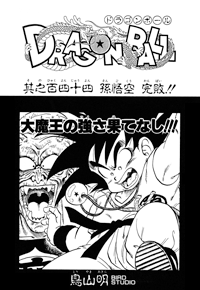 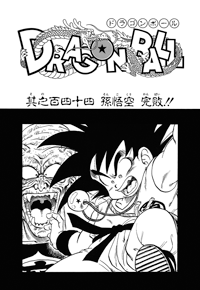 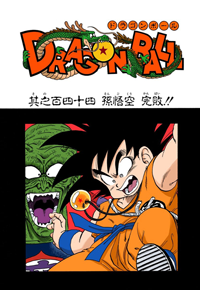 Goku can’t believe his strength, as Yajirobe says he’s glad he’s hiding. Then, Piccolo closes his fists, with the palms facing himself, and starts charging up for something. He looks at Goku, then throws an arm out, with the hand open and palm facing Goku, and fires a ki blast directly at him. Goku just barely manages to jump over it, but then Piccolo fires another one up at the now mid-air Goku. It’s a direct hit, and Goku hits the ground, looking even more dead this time…

Pilaf can’t believe the brat’s finally defeated, and Piccolo walks over to the fallen Goku and snatches the One-Star Ball from his neck. Piccolo flies back up to the airship, and says now they’ll go after the remaining Dragon Balls to restore his youth. Then the airship flies off, and Yajirobe comes out of hiding and looks over Goku’s body. He hears something, and bends down to hear that Goku’s heart is still beating!

Yajirobe shouts and smacks him, but Goku won’t wake up. So, he throws Goku over his shoulder and runs off toward a river, then dunks him in head first. Goku’s awake now, pissed, but Yajirobe tells him it cannot be helped, that Demon King Piccolo is a monster. Goku asks him if he knows where Karin Tower is, and Yajirobe asks what “Karin Tower” is. Goku explains that it’s a place, and asks Yajirobe to take him there, since he can barely move. Yajirobe says he will, so long as he gets him food like he promised.

The little plane has landed, and Kame-Sen’nin and Tenshinhan are sifting through the grass. Chiaotzu has found the Three-Star Ball, bringing their total up to five balls. Kame-Sen’nin checks the Dragon Radar, and he says the last two are together. And they are moving this way. Tenshinhan says that it must be Demon King Piccolo, while Yajirobe and Goku speed off in air car toward Karin Tower. 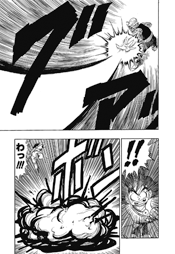 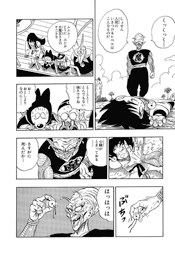 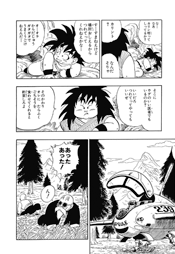