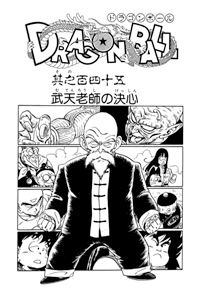 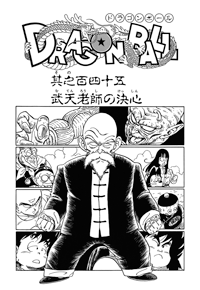 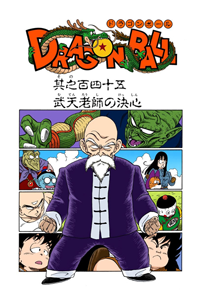 Pilaf informs Piccolo that the other party’s five balls are headed this way, and Piccolo is pleased to hear it. Meanwhile, Kame-Sen’nin also notices that the other two balls are headed their way. Kame-Sen’nin insists they won’t win by fighting, so, they’ll steal the other two balls. And, once they’re all seven together, they’ll call Shenlong and say, “Please erase Demon King Piccolo from this world.”

Goku and Yajirobe continue toward Karin Tower, with Goku complimenting Yajirobe’s car. Yajirobe then gets serious, and tells Goku that even though he twice beat Piccolo’s henchman, Piccolo himself is too much. Yajirobe says that he heard long ago, Piccolo was a real terror to the world. Goku asks how a guy like that was defeated, but Yajirobe doesn’t know. Then Yajirobe asks Goku what happens when you gather all seven of those Dragon Balls things, so Goku tells him about Shenlong, and wishes, and stuff.

Piccolo laughs about his wish, as the three good guys land their little plane in a field full of random rock formations. They disembark and put the plane in its capsule, and then Kame-Sen’nin punches a hole in the ground. He tells Chiaotzu to put the balls in there and bury them so they won’t be found. Then Kame-Sen’nin explains the plan: Chiaotzu hides behind that rock formation, while he and Tenshinhan go steal the other two balls. Then they’ll throw the two balls over to the hiding spot with their five, and Shenlong will come out. Finally, they’ll say, “Come out, Dragon,” and quickly make their wish.

Kame-Sen’nin looks at the radar, and sees Piccolo’s coming, so the three get ready. Pilaf says they’re nearing the other balls’ location, and Piccolo realizes they’re being waited out. Tenshinhan and Kame-Sen’nin are hiding under another rock formation, and Tenshinhan spots the airship headed this way, thinking it’s a bit more complicated stealing them from the airship. Mai informs Piccolo that they’re just above the Dragon Balls, and so they all look down over the area. Piccolo says they’re hiding, and then he swallows his two Dragon Balls, so that the other party can’t take them from him short of killing him. 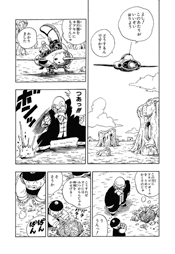 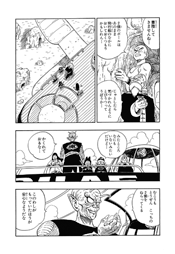 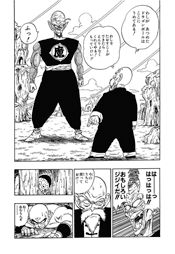