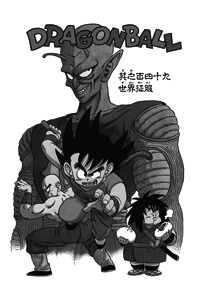 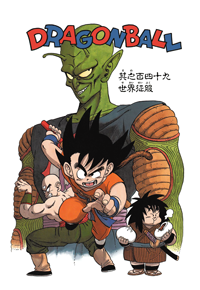 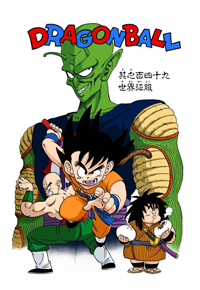 Bora picks up Yajirobe, who has the weakened Goku on his back, and Upa wishes them both luck. Then, Bora tosses them straight into the air, all the way up through the clouds. Yajirobe catches onto the tower, and then begins their ascent. Elsewhere, Piccolo arrives at the king of the world’s grand residence, King Castle, and he tells Piano it’s going to be his castle now. Piccolo and Piano walk to the front gates, and the guard says only authorized people are allowed in. Piccolo says he’s the king, and pops the guard on the neck, knocking him out. The second guard shoots at Piccolo, so Piccolo blows him up with an eye beam.

Piccolo telekinetically busts open the gates, and he and Piano walk toward the castle. Some more guards come towards them, but Piccolo’s not worried about these pathetic ants. Meanwhile, it’s night out at Karin Tower, and a pissed off Yajirobe continues climbing up there with Goku. And Piccolo and Piano are inside the castle now, with a trail of dead guards behind them. A big guard then shows up, and tells Piccolo to halt. Piccolo isn’t worried, though, and the guard tells him to surrender.

Piccolo doesn’t really want to surrender, and so the guard comes at him with a punch. But Piccolo catches his fist, and asks if that was supposed to be a punch. Piccolo shows him a real punch by knocking the dude in the face, and sending him flying into the wall. Piccolo grabs him and asks him where the King is, but the guard just asks Piccolo who he is. So, Piccolo shoves his arm through his chest, killing him.

Then Piccolo goes over to some other guards, and asks them where the King is. One guy tells him he’s at the top of the west tower, but Piano points out that the King is escaping in a little aircraft. Meanwhile, Yajirobe continues climbing Karin Tower, and finally he can see the top. He tries to tell Son, but Goku’s fast asleep, and Yajirobe gets pissed and yells at him to wake up. Back at the King’s Castle, Piccolo hops up onto the King’s little aircraft. 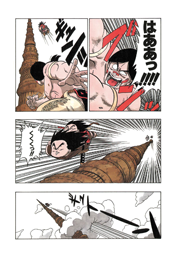 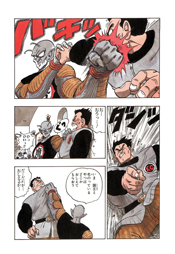 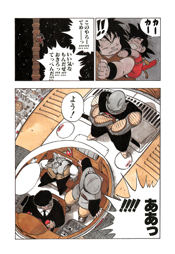