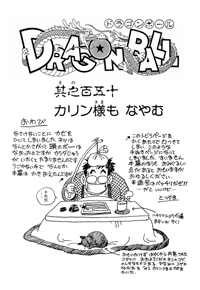 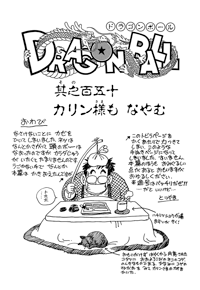 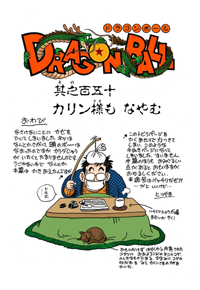 Piccolo kicks open the glass bubble roof, and the King (a little dog guy in a suit, with glasses and a mustache) asks who he is. “Me? I’m the one who’s replacing you to become the new King, Demon King Piccolo.” A guard in the little craft starts firing at Piccolo, so Piccolo says they still don’t seem to realize who he is. Piccolo grabs the guard by the head, holds him out over the ground, and then drops him to his death.

The King wants to know what he wants, so Piccolo repeats his intentions to become the new King. He tells the King he wants him to announce to the whole world that Demon King Piccolo is now the ruler, but the King says he can’t do such a thing. So, Piccolo is going to give him a splendid show. Piccolo closes his fist, and then opens it and waves his arm across the air, blowing up a large portion of the surrounding city. Piccolo tells the King he’ll destroy everything if he doesn’t do as he’s asked, and so the King relents.

Goku and Yajirobe have arrived at the top of Karin Tower, and Yajirobe catches his breath. Goku and Karin exchange greetings, and then Goku decides to explain why he’s come, but Karin already knows it’s because of Demon King Piccolo. Goku asks how he knows that, so Karin explains that he gets bored and watches the lower world from here. Goku can’t believe he can see down there from all the way up here, and Karin asks what he wants.

Goku explains that he wants to train so he can beat up that bad guy, and so Karin decides Goku should heal up first. He tosses Goku a senzu, and Yajirobe looks at the little seed, pissed that that’s the feast he was promised. Yajirobe runs over to Karin and grabs a handful of senzu from the pot, and chomps them down, saying they ain’t delicious. “Poof!” Yajirobe’s belly gets really fat, and Goku explains that each one is worth ten days of food. Karin says senzu also restore your body, and Goku’s impressed at being fully healed now.

Goku asks Karin if he’ll train him now, but Karin says there’s nothing left he can teach him. Then he says it seems nobody can win against Piccolo, even Muten Rōshi was killed. Goku starts to get really pissed about Kame-Sen’nin, and prepares to run off, but Karin yells that there’s nothing he can do. Goku insists he has to do something, so Karin tells him to hold up, there is one thing. If he’s prepared to try drinking… the Super God Water… 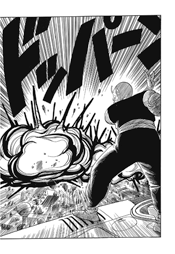 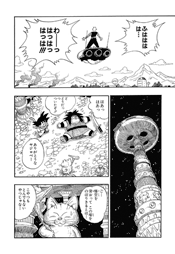 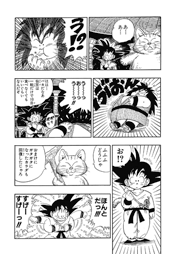