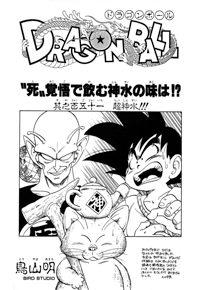 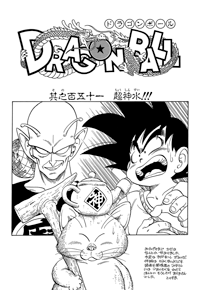 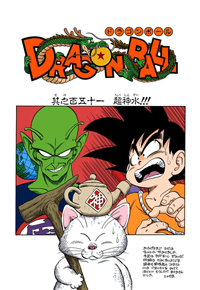 Goku asks if he can become strong from drinking that stuff, so Karin explains that it’s not that simple. “The Super God Water is not a trick like the Super Holy Water. It can draw out all of the hidden power you hold within you. It’s a magnificent water… Though, supposing you’ve already trained to master all your power, you won’t become stronger even by drinking the Super God Water…” Goku wonders if he has any hidden power left, and Yajirobe says he should try drinking the stuff.

“However, in truth, the stuff called the Super God Water is an incredible poison. If you don’t have tremendous physical power, mind power, and life power, you’ll suddenly die… Conquering that poison for the first time can draw out your hidden power that you hold.” Yajirobe doesn’t like the idea of poison, and asks if anybody’s ever survived drinking the stuff. Karin says up until now, fourteen people have drunk the Super God Water, but not a one has survived it.

Before Goku takes a sip, Yajirobe dips his finger in the cup to taste the stuff, and he gags and chokes on it, then spits it up. Goku’s not bothered by Yajirobe’s actions, though, and takes a deep breath before he downs the stuff. Goku suddenly starts screams and falls to the ground clutching his neck, and Yajirobe yells at him to spit it out. But Goku shouts back at him that he won’t die.

Meanwhile, back out in the field full of random rock formations, it’s also late at night, and Tenshinhan is attempting to perfect the Mafūba, but he keeps missing the Denshi Jar. He’s determined to get it right, though, so that those two (Kame-Sen’nin and Chiaotzu) didn’t die for nothing. And up atop Karin Tower, the sun is rising. Yajirobe says Goku’s been down for six hours now, and Karin’s impressed with his life power. Then Karin suddenly feels Goku’s hidden power coming out, and then Goku wakes up! Morning has come out in the field as well, and Tenshinhan finally manages to get the magic light to land in the Denshi Jar! Yajirobe is astounded that Goku is still alive, telling him just how awesome he really is. Karin tells him he’s done well and Goku is amazed by his new power. “My power… My power is overflowing…!” 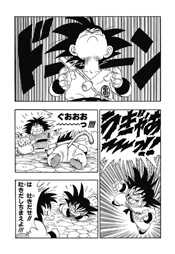 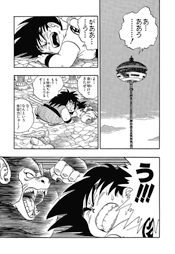 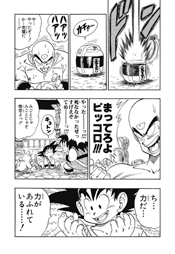