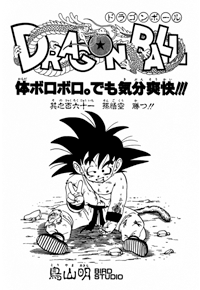 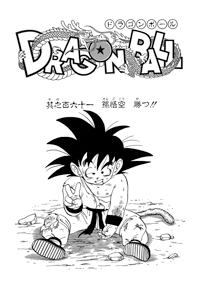 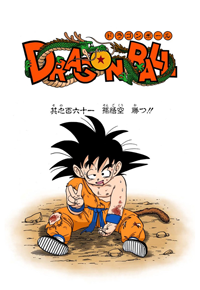 Goku continues flying up toward Piccolo with his fist out, until… Goku punches straight through Piccolo’s stomach, putting a huge hole in it. Goku falls back toward the ground, as Piccolo contemplates his defeat. He won’t allow the Demon Clan to die out, and so he coughs up one final egg, telling it to avenge its father. Piccolo then explodes, with the effects hitting Goku and sending him flying toward the ground. Tenshinhan’s worried about Goku crashing, but someone catches him — Yajirobe! Goku’s surprised to see him, and Tenshinhan’s glad to see it’s an ally.

The others have landed on the battlefield, ducking behind the remains of a wall, and Yamcha, still with his broken leg, wonders what that explosion was. Bulma, holding a gun, asks if they really have to help, and Yamcha says of course they, they can’t just let their friends die. Meanwhile, everything has been explained to Yajirobe and Tenshinhan compliments Goku’s work, but Goku says his body’s all busted up.

Yajirobe offers to take them both to get healed up in his car, but Tenshinhan declines, saying just to take Goku. Tenshinhan wants to hurry and tell everyone at Kame House about this, and tells Goku to get healthy. But, before they leave, “Ten-san… Is it true that Kame-Sen’nin died?” Tenshinhan tells him it’s so, as well as Chiaotzu. “Shenlong too…?” Tenshinhan nods, and then perks up and tells Goku he’s going to train for the next Tenka’ichi Budōkai. He tells Goku to train as well so they can fight again, and Goku agrees.

Yajirobe drives off with Goku, who falls fast asleep, as Tenshinhan thinks he’s really an amazing kid. Then Tenshinhan spots the broken Nyoi-Bō, and realizes Goku was so beaten up he forgot about it. And then Yamcha and the girls show up, asking where Piccolo is. Some time passes, and they help Tenshinhan back over to their little plane, with him having explained things.

Bulma contacts the TV channel inside the plane via the radio, and tells them to relay that everything’s okay, Piccolo’s been defeated. The person who did it was… a friend of justice… “And so it was just one little boy that rescued the world from the hands of evil… However, that peace… Won’t last very long…” The little egg has hatched, and an adorable little mini-Demon King Piccolo has emerged. “I’ll kill my father’s enemy! I hate peace! Sooner or later, I’ll do him in!” 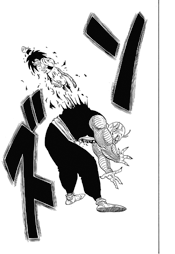 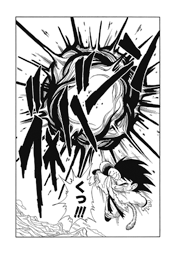 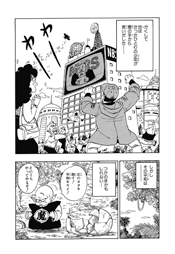