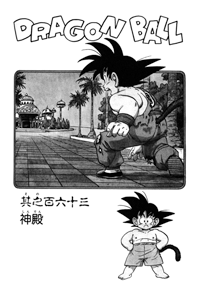 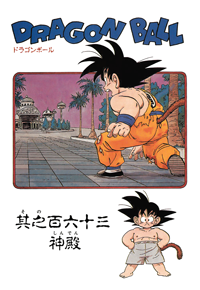 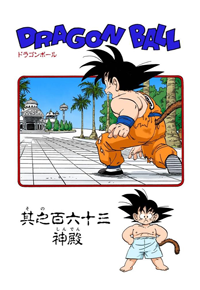 Yajirobe wants to know what he means about Goku’s clothes getting tattered up there, and Goku asks if God’s a dangerous person. Karin explains that he’ll be tested up there, but he has faith in Goku. Yajirobe doesn’t like the sound of that, but Goku’s not worried. “Okaaaaay, here goes!! Extend, Nyoi-Bō!!” Goku shoots up there, and Karin thinks Goku will be shocked when he sees God’s face. Yajirobe asks if his face is that frightening, but Karin says it’s not frightening, just familiar.

The Nyoi-Bō keeps shooting up, and then Goku finally sees the place. It’s huge, and round, but flat on the top. It’s like the bottom half of a sphere. The Nyoi-Bō finally stops, connecting in another big connector with a little hole in the tip, and Goku spots a ladder up above him. He swings up from the Nyoi-Bō to the ladder, and climbs all the way up to the flat surface.

The floor is tiled, no walls or ceiling, and there’s all kinds of nicely kept trees, and a temple on the other side. There’s a guy standing in the middle of the floor, with black skin and big eyes and lips. The two greet each other, and Goku asks him if he’s God. “I am Mister Popo. God’s servant.”

Popo compliments his work in defeating Piccolo Daimaō, and Goku asks how he knows that. “God knows everything. God is great.” Goku looks behind Popo, and asks if that is God’s house, and wants to go there. “You’ve brought proof of Karin’s approval?” Goku shows him the little bell, and so Popo says he’ll test him now. “You’ll have a match with Mister Popo. If you beat Mister Popo, you can meet God.” Goku thinks this’ll be simple, and says to hurry it up. “You’re the first human to come here. This test will be fun.”

Goku starts things off by leaving an afterimage, but Popo just throws a punch out and hits Goku in the face. “Ah! Success.” Goku wasn’t expecting this, and tells Popo to get ready this time. Goku rushes at him, saying it’ll be over with this one hit, but Popo just nonchalantly throws out another punch. “Success again. You’re not strong. You’re weak. You really defeated Piccolo Daimaō?” Goku gets pissed at being called weak, and decides to get serious. “Really? I’m glad.”

Goku comes at Popo with a kick, but Popo vanishes, then appears behind Goku and kicks him. Goku flies toward a tree, then swings around it and flies at Popo with another kick. But, Popo catches his leg, and then throws him across the floor. “Mister Popo is disappointed.” Goku gets pissed at being called weak again, and rushes at Popo, but Popo blocks all of his punches. Then Goku swipes at him, but Popo flies up over it and floats in the air. “Testing you is pointless. Go home.” 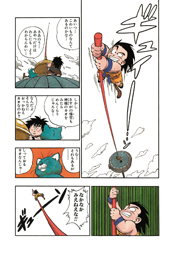 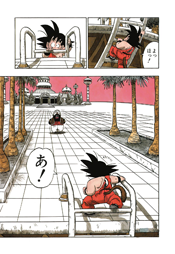 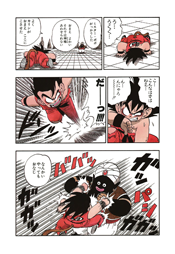