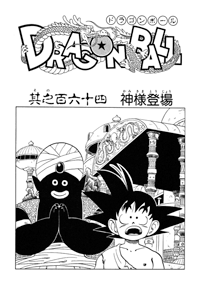 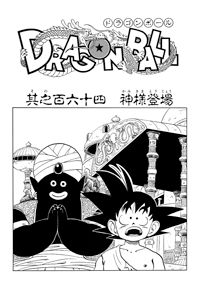 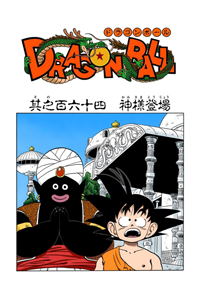 Goku can’t believe this, as Popo tells him that while he might’ve been strong down there, up here, things are different. “Now, go home, go home.” Goku insists he can’t leave, he has to meet with God to return everyone to life. Then Goku asks if he can use this place for some special training, and Popo says to do as he likes, though it’s futile. So, Goku tries to run some laps around the place, but then he gets dizzy and has to stop. “This is incredibly high in the sky. The air is thin,” says Popo.

Popo says something about moving faster than thunder when you’re calm, and Goku thinks it’s a bit difficult. Popo says it’s like this; your mind has to be empty. Blank expression. Goku says that’s real calm, he can’t feel his ki at all. Goku gets a blank expression on his face, too, but Popo says that’s just not thinking, it isn’t emptiness. Goku thinks this is hard.

Popo then demonstrates the moving faster than thunder by instantly moving behind Goku, and Goku says he couldn’t see anything. Popo has his back to Goku, and says he even knows that Goku’s touching his face with his right hand right now. “How did you know that!? Do you have eyes in the back of your head?!” Popo explains that he doesn’t rely on his eyes to see, he feels the movements in the air.

Goku says there’s no way he could win against Mister Popo, and Popo says he’s learned a lot from God. Goku asks if God’s even more amazing than Popo, and Popo says he’s much more amazing. Goku’s happy to be around such strong people, but then asks Popo why God didn’t beat up Piccolo if he’s so strong. Popo says God has his reasons. Then Popo tells Goku he should keep going until he can beat him, but Popo doesn’t know how many years it’ll take. Goku doesn’t mind that.

A voice calls out, and Goku asks Popo if it’s God, and it is. God says he’ll meet with him, and Goku gets excited. Popo leads Goku over to the temple, and they wait outside the grand entrance. God slowly walks out, and he looks just like… “Piccolo!!!! You bastard, so you’re still alive!!!” Goku flies over at God, but he just flicks him away, with Popo catching Goku. God is also a wrinkly old green guy with pointy ears and antennae, but he has the kanji for “God” (kami) on his outfit instead, and he has a staff.

God can’t believe that mischievous punk Karin didn’t tell Goku anything, and so he decides to explain things. Long ago, he and Piccolo were once one genius martial artist. He’d come here to learn from God, but, unfortunately, God died. He wanted to become God’s successor, but he couldn’t, because he had this evil dwelling in the bottom of his heart. So, he trained fiercely until he could drive out that evil. The evil was Piccolo Daimaō. Piccolo fled from here to terrorize the people below, until Goku defeated him.

God says he’ll give Goku something as thanks, so long as Goku will stay here and train. Goku is more than happy to do that, and then God says he also knows why he’s come here. As God, he can’t personally return people to life. But, Shenlong is his creation, and so he can return him to life. Now, he’ll return Shenlong to life, and revive the Dragon Balls! 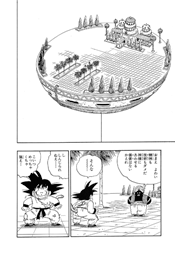 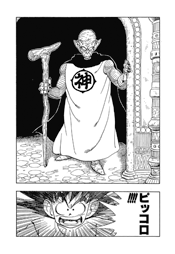 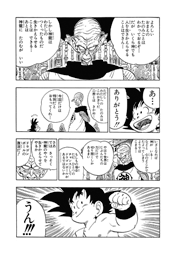