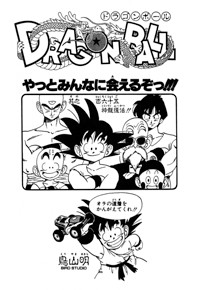 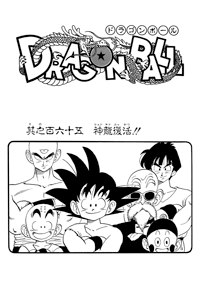 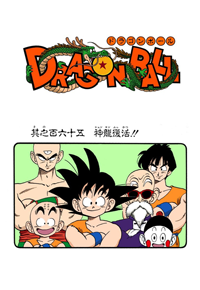 God tells Popo to go get Shenlong, and so Popo comes back with a glass encased little Shenlong statue. It’s in pieces, just like the real Shenlong was, and God asks Popo to fix it. Popo sits down and glues the pieces back together, and Goku asks about this thing. Popo made this, and God breathed life into it. God explains that he gave the Dragon Balls to the people below to give them courage and hope, but they didn’t use it for good things, just greed. God says Goku’s not like that, though, and then Popo’s finished.

God tells them to stand aside, and he fires a magic blast over at the Shenlong statue. Then Shenlong shoots out of it down toward the Earth, and God explains that he’s going back to the Dragon Balls. Normally they’d be ordinary stones for the span of a year, but in this case, a wish can already be granted. Goku’s excited to get to see everyone again already, but God says he’s staying here to train. After persevering for three years, he can see his friends again at the next Tenka’ichi Budōkai.

Goku asks why until then, so God tells him Piccolo will surely be there, targeting Goku’s life. Goku freaks out, because he thought he’d defeated him. God explains that just before he exploded, Piccolo had left behind an offspring. That offspring is getting stronger to exact revenge on Goku, and so if Goku stays here and trains for three years, he’ll certainly be able to defeat Piccolo this time. He and Mister Popo can’t fight him, so only Goku can do it.

Goku says he wants to start training immediately, but first, he has to piss, and asks where the toilet is. God and Popo fall over, and then Popo points Goku in the temple through the grand entrance. Goku runs in, and then Popo asks God that since he and Piccolo were once one, if Piccolo is defeated, God also dies. God says it’s unavoidable, and it’s his duty. He’s been meaning to do this for a long time, but he’s just been waiting for the right person to come along to replace him. And he thinks Son Goku just might be it.

The Dragon Balls are gathered on Kame-Sen’nin’s island, and Shenlong has appeared in all his awesomeness. Bulma says he was dead, and Shenlong explains that Son Goku asked God to return him to life. They wonder about this, so Shenlong says that he’s training for the next Tenka’ichi Budōkai in the Heavenly Realm. They can meet him again at the Budōkai. So, Shenlong’s going to grant the wish now, since he already knows what it is.

Kuririn wakes up, followed by Kame-Sen’nin and Chiaotzu! And elsewhere, Namu and Giran each wake up as well! Then the Dragon Balls disperse, and some time passes. The newly revived people have been told of Piccolo’s defeat, and Kame-Sen’nin asks just where Goku is now. Yamcha tells him that Shenlong said he’s training in the Heavenly Realm, and apparently Kame-Sen’nin knows of that. If Goku’s training there, then he’s learning from God.

Kuririn can’t believe this, and Kame-Sen’nin says Goku’s on a much different level than them now, leaving even him in the dust. Yamcha wonders just how much stronger Goku will become, and Tenshinhan says he’s anxious to see this God training at the next Budōkai, and the others agree. Speaking of which, Goku is up there meditating, and doesn’t much like this sitting still. God says he needs to train his soul before anything else. And Tenshinhan, Yamcha, and Kuririn are all training on Earth for their reunion with Goku. 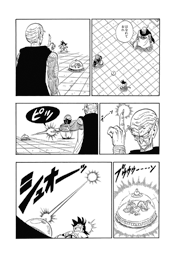 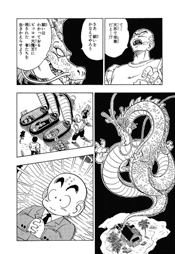 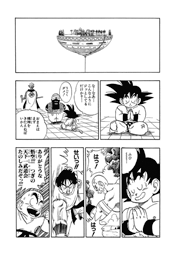