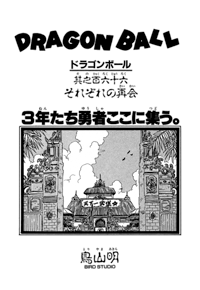 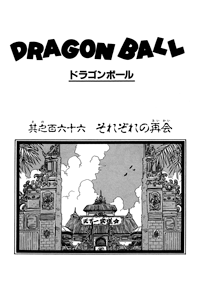 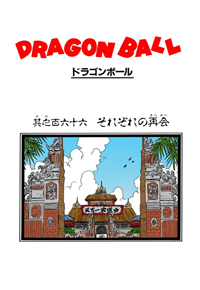 It’s pouring rain outside of the Tenka’ichi Budōkai grounds, and Kame-Sen’nin and Lunch are standing with an umbrella, thinking the others are late. Then a taxi pulls up, and Bulma, Oolong, and Pu’er all get out. Kame-Sen’nin is amazed at the woman Bulma’s become, and she elbows him in the face for touching her ass. Kame-Sen’nin thinks her personality hasn’t matured, and Bulma says it’s the same with him.

Kame-Sen’nin asks why Yamcha’s not with them, and Pu’er and Oolong explain that he left West City to train by himself. Kame-Sen’nin says Kuririn did the same, influenced by Goku’s absence. “Ossu!” Kame-Sen’nin asks Bulma if she knows this tall dude in the turban, but she doesn’t. “It’s real good to see you alive, Gramps! Everyone else also looks healthy! Where’s Kuririn, Yamcha, Tenshinhan, and everyone else? Are they already in the preliminaries hall?”

Everyone wonders if he could be… it’s Goku! He thinks it should be pretty obvious, and he gets excited when the rain stops. Goku realizes this thing on his head must make it hard to tell, and so he takes off the turban and says it must be unmistakable now (with his silly hair showing). Goku thinks Bulma and Kame-Sen’nin have shrunk, but Bulma tells him he’s just gotten huge. Goku says his hair hasn’t grown, though.

Goku asks Bulma if she has a disease because her lips are all red, and she yells at him that it’s lipstick. And then four more fighters show up together: Yamcha, with long hair again and some scars on his face; Kuririn, a little taller, but not nearly as big as Yamcha or Tenshinhan; and Tenshinhan and Chiaotzu are the same, wearing the same outfits as they did to the last Budōkai, but instead of having the kanji for tsuru (“crane”) on their outfits they have ten (“heavens”) and gyō (“gyōza”), respectively.

Yamcha doesn’t think much of their reaction (everyone’s a bit underwhelmed), and Kuririn thinks they must just be surprised at how they’ve all changed. (But actually, they’re just more taken with Goku’s arrival.) Kuririn tells Muten Rōshi to look at how he’s grown, and then Goku tells Kuririn he seems healthy. Goku says everyone’s here now, and Kuririn asks if that’s really him. Then Kuririn runs over and hugs Goku, crying, and Yamcha and Tenshinhan are surprised that it’s really him.

Some time passes, and a guy with a megaphone asks for the participants to head to the competition hall. Goku asks Kame-Sen’nin about giving them a dōgi, but Kame-Sen’nin tells him that since they’re all doing fine walking their own path there’s no need for them to wear the Kame (“turtle”) dōgi. Then they all prepare to leave, but first, Tenshinhan leans over and asks Muten Rōshi if he’ll be competing this time. Kame-Sen’nin whispers that he’ll pass, since he can’t compete with these guys anymore. Bulma thinks Goku has grown up really well, and Oolong thinks she’s a bimbo.

Inside, Kuririn has changed into a Kame dōgi he had made at a dōgi shop, and Yamcha says they’ve thought alike, as he’s wearing one as well. And Goku too, and then Yamcha asks him about his tail. Goku says God got rid of it because he wanted to restore the destroyed moon. For some reason, his tail was interfering with that… Then Goku feels something, and Yamcha and Kuririn wonder what’s up. Goku has spotted a green guy with pointy ears, a turban, and a mantle — Piccolo’s offspring, and he’s already grown to adult size. Yamcha and Kuririn ask Goku if they know this guy, but Tenshinhan recognizes him. 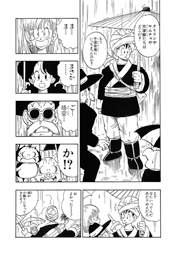 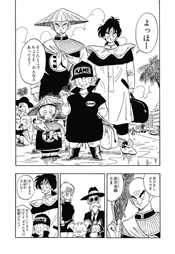 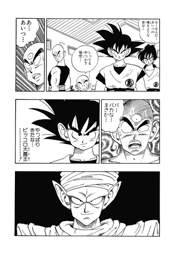