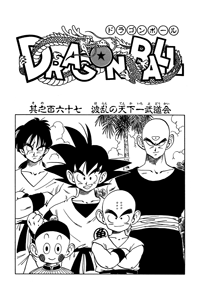 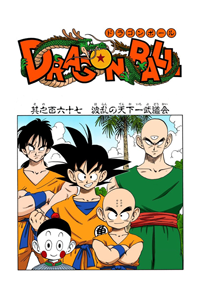 Troubles at the Tenka’ichi Budōkai

A girl then comes up and taps Goku on the shoulder, and she knows his name is Son Goku. Goku asks who she is, and then she gets pissed and walks off. Kuririn asks who that cute girl was, but Goku doesn’t know, and Kuririn’s jealous. Then an official says the preliminaries will begin. This time there are only seventy-two entrants, considerably less than last time. The drawings for the preliminary blocks begin, and Tenshinhan telepathically tells Chiaotzu to scatter the gang’s numbers, along with that guy (Piccolo’s offspring).

Goku gets #2, so he’s in Block One’s first match. Kuririn is impressed at how they’re all scattered across the blocks, and Chiaotzu gives us the peace sign. So, now the preliminary matches to determine the eight finalists will begin, and everyone is told to head to their proper blocks. Over at Block One, an official tells #1 and #2 to get onto the contest platform, and Kuririn tells Goku he’s anxious to see God’s training.

Tenshinhan and Yamcha notice Goku’s up, and decide to go watch with Kuririn. Goku’s opponent is once again King Chapa, and Chapa says that it won’t be like before. The match is called to begin, but Goku doesn’t budge, and Chapa starts to get pissed. Yamcha says he can’t feel a trace of Goku, and Tenshinhan says Goku’s become completely empty, and King Chapa can’t win. Chapa charges at Goku, and kicks at him, but Goku’s gone. Chapa thinks maybe he’s in the air like last time, but Goku is behind him, and pops Chapa on the back of the neck for a knockout.

Everyone’s impressed, including Piccolo’s offspring, although he thinks Goku couldn’t possibly win against him with those moves. And so, Kuririn, Yamcha, and Tenshinhan each win their matches. Chiaotzu, on the other hand, gets trashed, and he loses. His opponent has some weird helmet thing on his head, and goggle things for eyes, who says Chiaotzu’s still alive, but only because he didn’t want to get disqualified. Tenshinhan looks up at the opponent, who greets both Tenshinhan and Son Goku. “T-Tao Pai-pai!?” 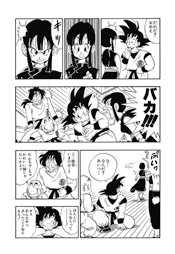 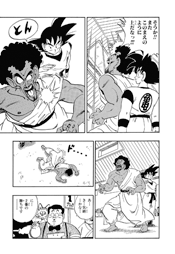 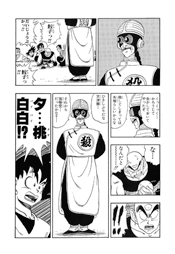