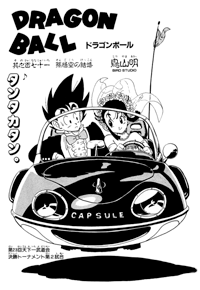 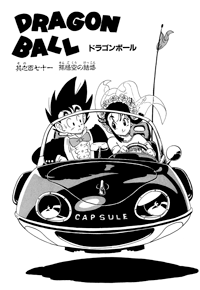 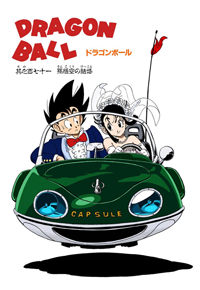 Goku asks the girl if she isn’t mistaking him for someone else, but she says he’s Son Goku, so it ain’t no mistake. Everyone else wonders who she could be, as the announcer calls for the match to begin. The girl kicks at Goku, then strikes at him, but Goku dodges, and asks if they’ve met somewhere before. The girl says they have, and then comes at him again. Goku blocks her punches as she goes on about not understanding a girl’s feelings, and making her wait.

Then the girl says that he’s forgotten his promise as Goku jumps up to dodge her elbow. Goku can’t believe he really made a promise to her, as she jumps up in the air after him, throwing some kicks that Goku dodges. Kame-Sen’nin thinks her moves are like that of the Kame-sen Style’s. Then they both come back down to the ring, and Goku asks what he promised her. “To take me as your wife!!!”

The girl’s pissed he doesn’t remember and Goku asks Kuririn what a “wife” is. Kuririn and Yamcha fall over, and then Kuririn says taking a wife means to get married. And Kuririn’s pissed at Goku for getting such a cute girl, and he wants one himself. Yamcha explains that getting married means living together as man and wife, and can’t believe Goku made a promise like that. Goku asks her just who she is, and she says she’ll tell him if he wins. Goku’s glad it’s something so easy.

Oolong smirks and remarks about how Goku still doesn’t know who she is, and says that, he, Bulma, Pu’er, and Muten Rōshi were also there when Goku met her. Goku tells the girl to get ready, then he punches at her, not hitting her, but the shockwave sends her out of the ring. The announcer thinks nothing happened, but Kame-Sen’nin explains to him that he merely blew her away with a shockwave.

Goku tells the girl to get up, as Piccolo, who’s standing atop the roof of the backstage house, says that was like one of the Demon Clan’s techniques. The girl’s impressed with her strong husband, and can’t believe he still doesn’t know. “I’m Gyūmaō’s daughter, Chi-Chi!” Goku, Yamcha, Kame-Sen’nin, Bulma, and Pu’er all freak out, but Oolong already knew it was her.

Goku remembers their conversation in the car at Gyūmaō’s castle, and thinks to himself how he’d thought a “wife” was something you eat. But, a promise is a promise, so he tells Chi-Chi they’ll get married. She grabs him by the arm and snuggles up next to him as they walk backstage, and he tells her not to get so close, it’s hard to walk. Then Goku tells Kuririn to be careful, his opponent isn’t no small matter. So, Kuririn and Piccolo walk out to the ring, calling each other “stuck up bastard” and “small fry”, respectively. 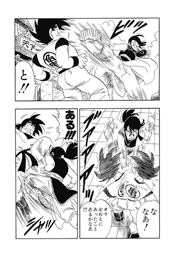 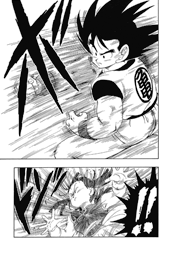 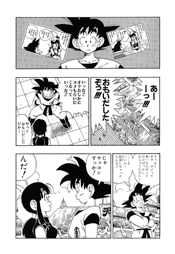