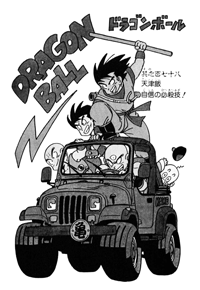 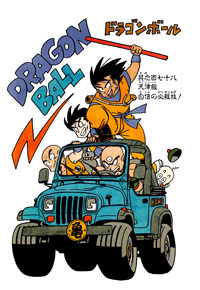 Tenshinhan looks down and can’t believe Goku has his obi, and even Piccolo (who’s up on the roof again) thinks he’s fast. Tenshinhan says Goku went so fast even his own eyes couldn’t see, however, he hasn’t lost this match yet. He tells Goku about his great sure-to-kill technique, but Goku hands him back his obi first. Tenshinhan freaks out and pulls his pants back up, and Goku asks if this’ll be the Kikōhō again. Tenshinhan says the Kikōhō is too dangerous, for the both of them.

Tenshinhan says this technique doesn’t take as much power as Kikōhō, either, and tells Goku it’s also absolutely unavoidable. These three eyes aren’t enough to catch Goku’s movements. However, with twelve eyes, nothing could escape his view. “Twelve eyes?!” Tenshinhan folds his arms in front of himself, and then splits into two! And then those two split, making a total of four Tenshinhans!

Goku says this isn’t Zanzōken, all of them are real. They all four say this is Shishin no Ken, and then they split up with each standing in one corner of the ring. Goku wonders what he’ll do, and each of the four Tenshinhans fire blasts at Goku. But Goku jumps up into the air, and so the Tenshinhans fire some eye blasts up at him, and they all hit. One of the Tenshinhans tells Goku he should give in, but Goku says he won’t, since he’s already discovered two weak points. Up on the roof, Piccolo thinks it’s Son Goku’s win for sure. 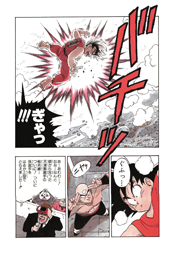