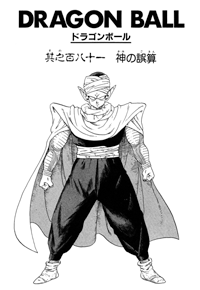 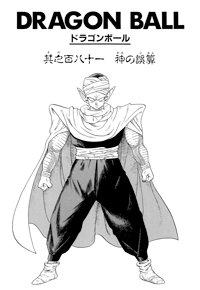 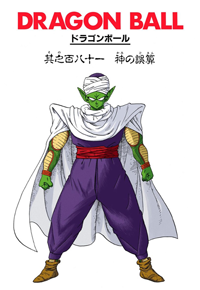 Shen thinks about having borrowed a weak human’s body, but then Piccolo asks aloud about borrowing a human’s body. Shen says, in some weird language, that Piccolo can read minds, and then Piccolo says, in the same language, that he now knows who he really is. (They keep talking in this language for a while.) Piccolo asks what God wants here in the lower world, and Shen says he shouldn’t have to say, since it should be obvious.

Piccolo laughs about him thinking he could beat him, Piccolo, and thinks God’s lost his mind. If one dies, the other dies. Shen says he doesn’t mind that, and Piccolo can’t believe he’d actually commit suicide. Shen says there’s nothing to worry about, as he’s taught a human to take his place. Then he pulls a little bottle out of his shirt pocket, and places it on the ground. (Here the weird language stops.)

Piccolo freaks out, as this bottle can obviously serve as a Denshi Jar, and Shen announces a Mafūba. Magic waves begin to swirl toward Piccolo, but Piccolo smirks, and then announces his Reverse Mafūba. The magical wave instead begins to swirl back towards Shen, and then God flies out of the human’s body. God yells out to Son to not worry about him dying, just rid the world of Piccolo. And then Piccolo directs God into the little bottle, and then runs over and plugs the top. Piccolo smirks and holds the bottle as everyone looks on in shock. 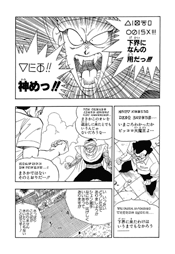 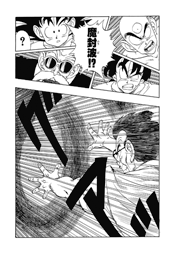 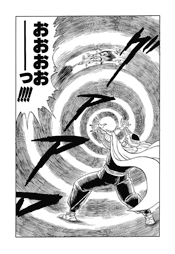