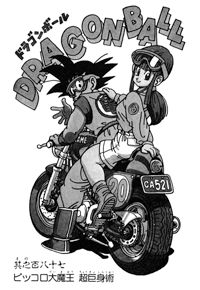 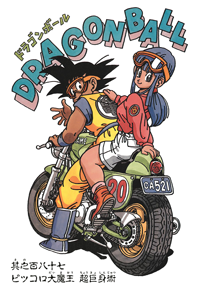 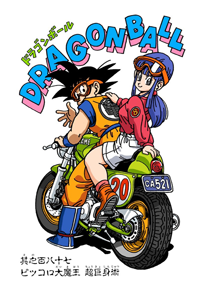 Goku thinks this large size is no biggie, and so Piccolo fires a mouth blast down at him. Goku dodges it by running though Piccolo’s legs, and then he jumps up and kicks the back of Piccolo’s leg. Piccolo loses his balance, and starts to fall down backwards, but he catches himself by placing his hands down on the ring. Goku then grabs one of his fingers, and slams the giant Piccolo overhead by it!

Kame-Sen’nin asks Kuririn if he’s noticed that even having used that tremendous Kamehameha, Goku’s physical strength hasn’t gone down at all. Piccolo gets back to his feet, and Goku yells up at him that even if he got much, much larger, he still wouldn’t be much trouble. Piccolo hints that he can get even bigger, and Goku can’t believe it.

Before, Goku reached Piccolo’s ankles, but now he’s barely level with Piccolo’s toes! Piccolo laughs maniacally about his assured victory, but then Goku thinks Piccolo’s right where he wants him. Goku jumps way up to Piccolo’s face, then fires a Kamehameha out, projecting himself into Piccolo’s mouth. Piccolo gags and chokes, and then finally spits Goku out. Goku then tosses something over to Tenshinhan — the bottle with God in it. So, Tenshinhan pops it open, and out pops God. 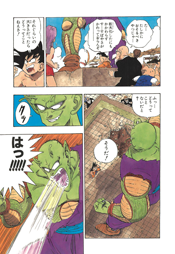 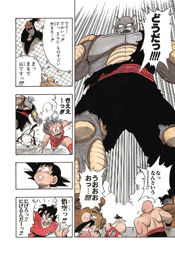 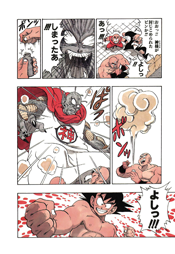