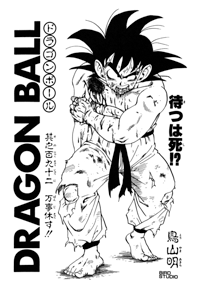 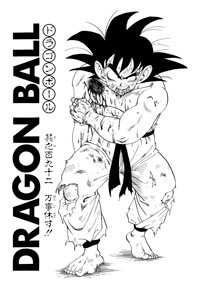 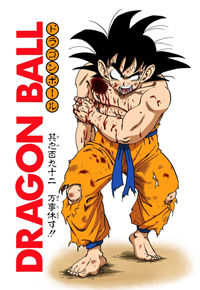 Goku falls back clutching the hole in his shoulder, which is bleeding really bad, and Goku coughs up some blood, too. Piccolo gets back up, and stands over Goku, pissed that he’s still alive. Piccolo shouts that he’s going to attack him now, and so he steps down on Goku’s chest. Tenshinhan, Yamcha, and Kuririn all run in to help, but Piccolo stops their advance by blasting them with some electricity, and busting up the ground in front of them.

Goku gets back up, though, and he’s glad Piccolo’s missed his vital areas. Piccolo punches at him, but Goku ducks it and punches Piccolo in the gut. Piccolo then kicks Goku, and they break, and they both stop to catch their breaths. Piccolo thinks it’s only a matter of time before Goku bleeds to death, and then hits Goku with an elbow, knocking him down. Piccolo jumps over toward Goku, and comes down, landing on Goku’s legs, breaking them. Piccolo says it’s just like when his father fought him, all Goku has left is his left arm. But, this time it’ll be different.

Piccolo fires a little blast down at Goku’s left arm, injuring it so that now he’s unable to use his limbs. Piccolo says there’s only one attack left, and so he flies up into the air. God then tells Tenshinhan to kill him, so that Piccolo will also die. God yells at him to hurry, since God can’t kill himself, and they need to save Goku. It’ll only be temporary, Shenlong can revive him, and so Tenshinhan agrees to it. But then Goku tells them not to do that, and says he’ll win. And finally, Piccolo fires a blast down at Goku. 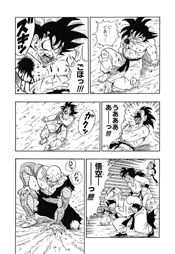 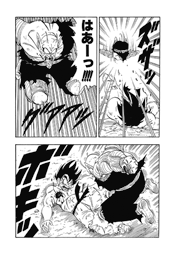 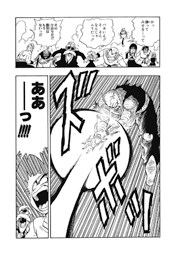