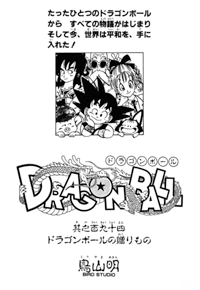 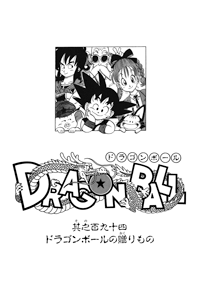 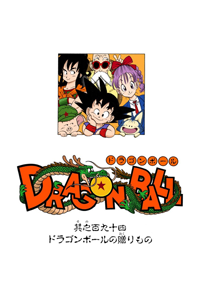 The Gift of the Dragon Balls

Everyone continues rushing over to Goku, while Yajirobe digs his way up from the ground, now that it’s safe to come out. Everyone stops celebrating and starts worrying, since Goku can barely move, but Yajirobe comes up to them, saying he’s brought senzu. Yajirobe gives Goku one, and he springs back up, fully restored. Goku flies up into the air, shouting, “I did it!!!! I’ve won the Tenka’ichi Budōkai!!!! Hyahhaaaaa!!!! Hurrah, hurrah!”

Well, not everyone is celebrating. God stands over the fallen Piccolo, and prepares to finish him off, but then Goku flies down and stops him. God says he has to kill him, since he’s still alive. But Goku says he’ll just beat him up when he does something bad again, plus God would also die if Piccolo dies. Tenshinhan says that they’ll just revive God with Shenlong, but Goku says God lied about that. If God, the creator of the Dragon Balls, dies, Shenlong probably will as well, and the Dragon Balls will disappear.

God becomes silent, and says that he’s no longer fit for the position of God. But Kame-Sen’nin tells him that’s not so, the world is at peace again, and Son Goku and everyone else wouldn’t be here if not for the Dragon Balls. This whole thing started because of just one Dragon Ball, and now the world is safe.

God tells Goku he has a great teacher, and Goku agrees, although he’s a bit of a pervert. And then God magically fully restores Goku’s outfit, saying that the Kame marked dōgi is the best. And then Goku calls out to Yajirobe to toss him another senzu, so Yajirobe obliges. And Goku feeds it to Piccolo, to everyone’s horror. Piccolo gets back up, laughing at Goku’s stupidity, and then flies away until the day they meet again, when he’ll get his revenge. Goku really hopes he’ll get stronger so they can fight again.

Bulma thinks that Goku’s really grown since she first met him in the mountains. Chi-Chi then runs over to Goku, hugging him and stuff, and Goku tells her not to get so close. Then God tells Goku he wants him to replace him as God, but Goku declines, since it’d be too boring. And then Chiaotzu flies in, all bandaged up, and is glad to see that everyone’s okay. God asks Goku again, but Goku just sticks his tongue out, and calls for Kinto-Un. He and Chi-Chi hop on, and he says, “Everyone, bye bye!!! Let’s meet up again!!!” He and Chi-Chi zoom off on Kinto-Un, leaving everyone astonished… 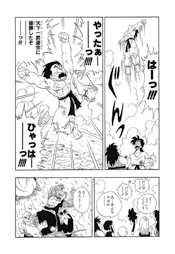 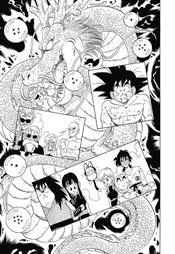 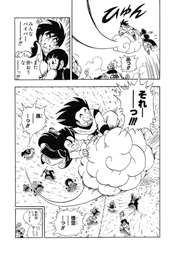