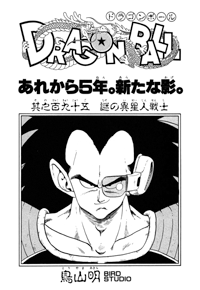 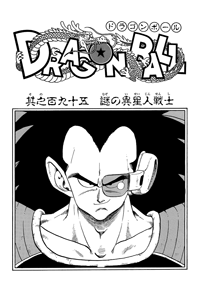 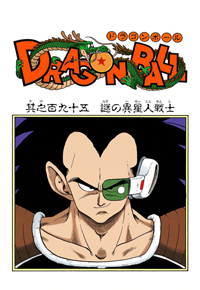 “On a peaceful day, five years after the conclusive battle with Demon King Piccolo…”

A cigarette-smoking farmer is throwing hay into the back of his truck when he hears something. All of a sudden something huge crashes down from the sky a distance away. The farmer wonders if it’s a meteor or a UFO, and hops into his truck to go check it out. He finds that the crater was made by a small space pod.

The space pod starts to open up, and someone comes out! He hops up out of the crater onto the grass, right in front of the farmer, and he’s really annoyed at someone named Kakarrot for there still being people on this planet. The farmer wonders just who this is, and a device over the alien’s eye beeps. He laughs about the farmer being trash with a battle power of only 5.

The farmer fires his shotgun at the alien, but the alien catches the bullet! Then he throws the bullet back at the farmer, killing him. The eye device beeps again, and the alien notices that there’s a large battle power at 4880 [unnamed measurement of distance] away, so he flies off towards it, thinking it may be Kakarrot.

Piccolo is standing evilly over a mountainous area, when he feels a great power headed his way. He wonders if it might be Son Goku, but it turns out to be the alien. The alien annoyed that this isn’t Kakarrot, and Piccolo asks what he wants — to die? The alien checks his eye device, and Piccolo has a battle power of 322. “But, after all, you’re no match for me.” Piccolo doesn’t like hearing that, and angrily fires a Shōgekiha (“Shockwave”) at the alien.

When the smoke clears, the alien is completely unscathed, and asks if it’s his turn now. But, before he makes a move, his eye device beeps and detects another large power, this time at 12909 [unnamed measurement of distance] away. It’s the largest power on this planet, so it must be Kakarrot this time, and so he flies off again. Piccolo can’t seem to move, and he can’t believe this. As the alien flies off he says, “You’ve lost sight of the pride of the strongest warriors in all the universe, the Saiyans, haven’t you, Kakarrot!!” 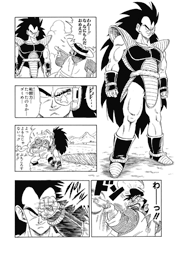 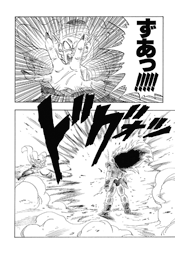 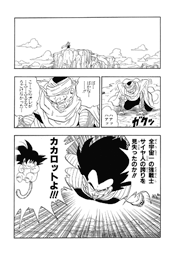