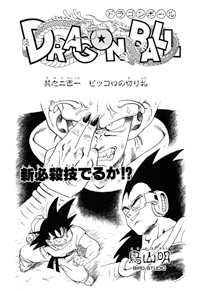 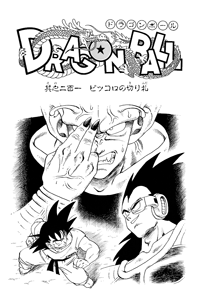 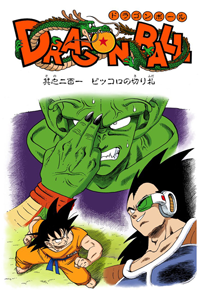 Raditz laughs at them for trying to think up some scheme, while Goku asks Piccolo if he really does have a new technique (and can he do it with just the one arm). Piccolo says it’ll be okay, but Goku will have to hold off Raditz while he gathers enough ki for it. Piccolo tells Goku that he’ll use this technique on him after Raditz, and Goku laughs. Raditz wonders why they’re laughing, and then Goku charges at him. Piccolo announces his Makankōsappō and puts his forefinger and middle finger together against his forehead to charge up, as Goku begins punching at Raditz. But then Raditz turns things around and gets in a few good hits before kicking Goku off into the distance.

Goku catches himself and heads up into the air, and prepares a Kamehameha. Raditz freaks out as his eye device says Goku’s battle power has gone up to 924. Raditz realizes he’s able to focus his battle power to make it rise. And then Raditz turns around to notice that the other one (Piccolo) is going up to 1020…30… He can’t believe this, and just then, Goku fires the Kamehameha down at him. Raditz just barely manages to avoid it, but then Goku diverts it to follow him! Raditz suddenly stops and puts his hands out and stands to catch it.

When the blast clears, Goku can’t believe Raditz is still okay. Raditz swipes his arm, and sends a shockwave up at Goku. Goku falls to the ground looking pretty messed up (his shirt is almost completely torn off), and as Raditz prepares to attack him while he’s down, Piccolo is done charging up. Raditz freaks out, because now he’s at 1330, and it’s all in his fingertips; these guys are able to freely manipulate their power. Before he can do anything, Piccolo fires his Makankōsappō right at Raditz! 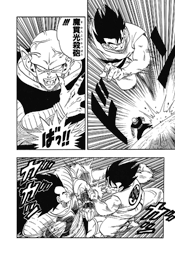 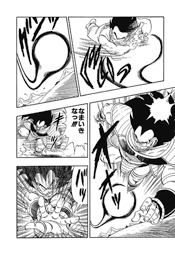 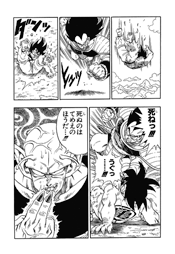