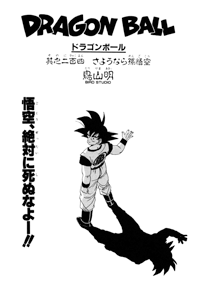 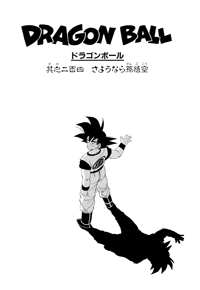 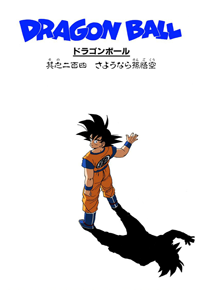 The blast sharply pierces through the chest of Raditz, and comes out through Goku’s back. Then the two of them fall to the ground with huge bloody holes in their chests. Raditz can’t believe Kakarrot sacrificed his life, and Piccolo begins to explain that he can just be revived with the Dragon Balls. Raditz starts laughing and says that everything up until now has been broadcast to his two comrades way out in space. They’ll come here and clear out all the humans, and maybe wish him back while they’re at it.

Goku asks how long until those two come here, and Raditz says one year. Raditz keeps going on about how bad it’ll be when they arrive, and Piccolo finally gets fed up and finishes him off. Kame-Sen’nin, Bulma, and Kuririn are flying in a plane, and then Kuririn spots some people below them. They notice the only one standing is Piccolo, and wonder what’s happened.

Then they both blast off in space pods just like Raditz’s, and talk about how high Kakarrot’s kid’s battle power was. The little alien figures it may be due to the mixing of Saiyan and Earthling blood. The big alien says something about him being a Super Saiyan, and things if they breed with the Earthlings they could reestablish a stronger Saiyan empire. But the small alien thinks they should just kill everyone because it would be a bad idea to have a bunch of brats stronger than them running around. Back on Earth, Piccolo has explained the events, as Kuririn stands over Goku, and Bulma tends to Gohan. Goku then softly passes away, and his body just disappears! Piccolo says that bastard God must have done it, and thinks he probably has some plan for Goku. And the two other Saiyans decide to hibernate for the long journey to Earth… 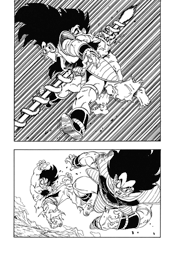 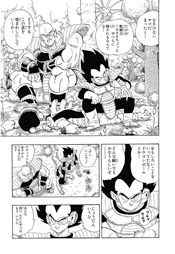 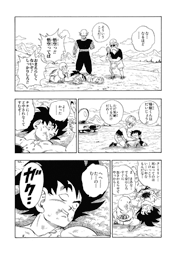