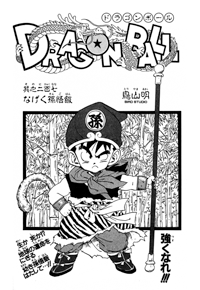 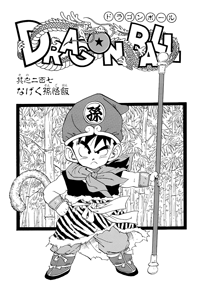 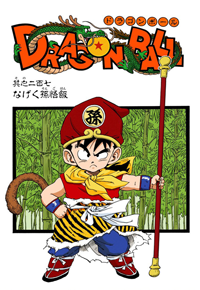 Gohan is worried if the training will be good, and Piccolo tells him the first part will be survival training. He’s going to leave Gohan here by himself to rough it for six months. Then they’ll get to the fighting. Gohan freaks out and says he’ll die all alone, and Piccolo says he’ll have bloodthirsty beasts to keep him company. Gohan gets scared, and Piccolo explains that it will all make him tougher, able to face spiritual and physical challenges.

“Don’t forget that the key to the fate of the world is in your grasp. Believe in your own power, and the effectiveness of that power. You must study to bring it out.” Piccolo then bids farewell, and tells him not to even think of running away — this is Heaven compared to the surrounding area. Gohan then cries and asks where the food, bathroom, and bed are, and Piccolo just laughs at this. Gohan thinks he’s cruel, and Piccolo tells him it’s his fate to be cruel, just like him.

Meanwhile, God is thinking about this Piccolo seeming different, and Mister Popo agrees that the old Piccolo Daimaō wouldn’t be making Son Goku’s son strong. And then God explains that Raditz went on to the afterlife, and normally, those killed by the Demon Tribe can’t move on. So he must be different from the old Piccolo. God seems to think Piccolo will be killed in one year when the two Saiyans come, which means he’ll also die. God thinks Piccolo may be trying to leave something behind after he’s gone, even if it is Son Goku’s son. Mister Popo mentions the Dragon Balls, and God says the next time will be the last time they’re used.

Gohan is out in the wilderness, scared and crying. And then to make things worse, a dinosaur shows up, and Gohan quickly runs away from it… until he trips and falls. The dinosaur chomps down at him, but Gohan jumps up out of the way. The dinosaur looks around, and can’t find him because Gohan is now atop a nearby mountain far above the dinosaur. Gohan then cries about being trapped up there, all the way until nightfall, when he’s just lying down sniffling. He then spots a few apples, and excitedly eats them. But there’s no apple trees up here… And the apples are sour. Gohan cries about wanting Chinese food, and Piccolo, who’s watching from afar, gets pissed. Meanwhile, Goku continues hopping along Serpent Road. 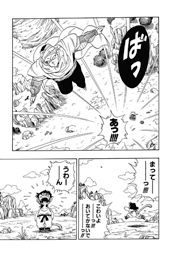 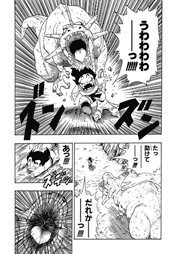 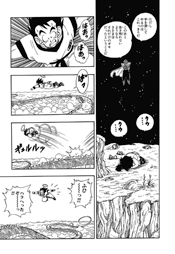