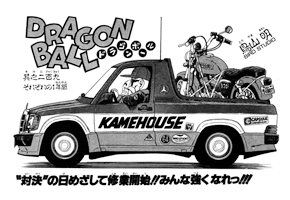 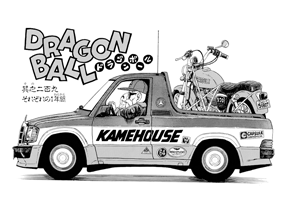 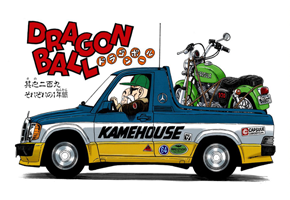 Chi-Chi and Gyūmaō are speeding over the ocean in an air car, on their way to Kame House. Chi-Chi is pissed about Gohan being gone all night and not getting his studying done, while Gyūmaō is trying to calm her down. At Kame House, Bulma is in her bathrobe, and it seems she’s been working with Raditz’s eye device all night. And now she’s finally got it beeping. But Kame-Sen’nin, Umigame, and Kuririn are all crashed out, so she fires a machine gun to wake them up. First she tells Kame-Sen’nin to stand up, and she gets a reading of 139 for him. Bulma says she’s revealed the number expressing the strength of Muten Rōshi.

Bulma says they can still use this to get Yamcha and everyone to help gather the Dragon Balls, and return Goku to life in no time. But then Yajirobe shows up at their doorstep and starts yelling, “Hey!!” Kuririn goes out to see who’s making all that racket and recognizes him as the guy from Karin’s place, calling him Armadillo. “It’s Yajirobe, dumbass!!”

Yajirobe has a message from Karin. “He said for you, Yamcha, Ten-whatever, and Chiaotzu to all come immediately!” Kuririn asks why everyone needs to go to Karin Tower, and Yajirobe explains that they’ll all be getting training from God, even him too. Kuririn’s amazed, and Yajirobe says he doesn’t really want to fight the strong aliens, but he has no choice. Yajirobe prepares to leave, but then remembers to tell them not to wish Goku back to life. Uranai Baba said he’s training in the afterlife. He speeds off, and everyone wonders about the stuff he’s just told them.

They see another air car coming by, but this one is different. Kame-Sen’nin freaks out when they notice it’s Chi-Chi. Gyūmaō bows down before Muten Rōshi, and then Chi-Chi wants to know where Goku and Gohan are. “Uh…the truth is…” Sometime passes, and then Chi-Chi freaks out when she hears Gohan was taken by Piccolo Daimaō. Gyūmaō asks why Goku didn’t do anything, and Kame-Sen’nin says he’s dead. Chi-Chi then faints.

“Soon, six months has passed, and Yamcha, Tenshinhan, Chiaotzu, Kuririn, and Yajirobe have all received stern training from God every day. And even after six months now, Son Goku is still running toward Kaiō’s house. Will he ever arrive? And Son Gohan… has gotten stronger and been able to survive.” That dinosaur from before shows up, and Gohan is able to run away with no problem. He jumps up out of the way, and the dinosaur crashes into a mountain. The end of the dinosaur’s tail is missing, and then Gohan cuts off another little slice to have some meat. Then he blasts a log to set it on fire, and roasts the meat over it with his sword. Piccolo seems impressed with his progress as he watches from afar. 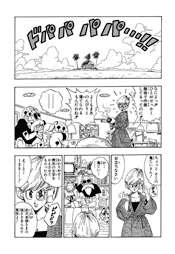 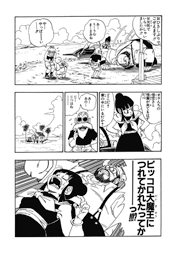 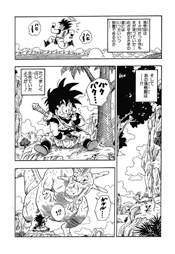