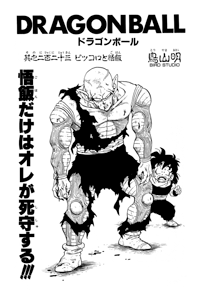 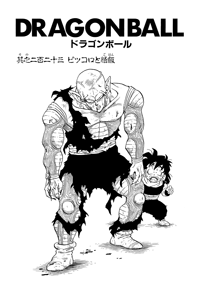 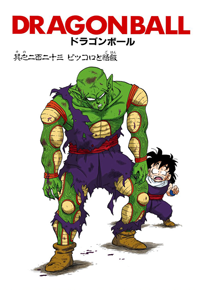 Nappa laughs about his attack, but is surprised to see it hit Piccolo instead. The busted up Piccolo weakly tells Gohan to run away, and then falls to the ground. Gohan asks why he saved him, and he just says to run away again. Gohan cries at him not to die, and Nappa laughs at him taking his turn to die early. Goku continues zooming along on Kinto-Un, but he feels one ki rapidly getting smaller and he wonders who’s dying. Up at God’s Palace, God is fading away as well. He says Goku didn’t make it in time, but he’s at least glad that Piccolo died like that.

Piccolo laughs about how bad it is that Piccolo Daimaō died protecting a brat. Then he says that Gohan is the only one who’s ever really talked to him. “All these months with you… weren’t so bad… Don’t… die… Go…han…” Goku then feels his ki disappear, as God also bids farewell to Mister Popo. Back on the battlefield, Gohan starts crying, but also gets really angry in the process. He puts his hands over his head and screams, “Masenkō!!!!” Vegeta gets a reading of 2,800 on his scouter, and can’t believe how much they really can change their battle power.

Gohan fires his Masenkō, which looks similar to a Kamehameha, right at Nappa, but Nappa manages to swat it away. Nappa says that he hurt his arm on that, and Vegeta says his battle power has gone back down now. Kuririn thinks they’re just too strong. Gohan apologizes to Piccolo for not being able to get revenge, and now he doesn’t even have the strength to run away. Kuririn still can’t move at all, as Nappa walks over to finish off Gohan.

Nappa tries to crush Gohan with his foot, but when he looks down he notices that Gohan is gone and sees him floating nearby on Kinto-Un. Gohan himself is surprised to see Kinto-Un. Vegeta then looks up into the sky, and Gohan and Kuririn both get excited. “So you’ve finally appeared!!”, says Vegeta as Goku lands on the ground. 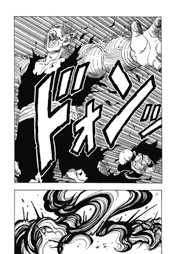 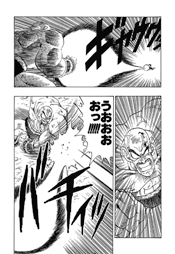 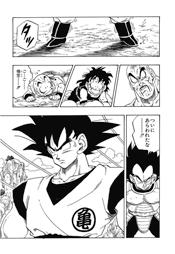