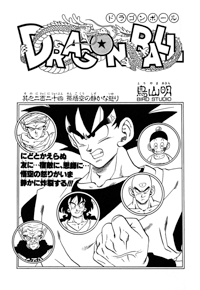 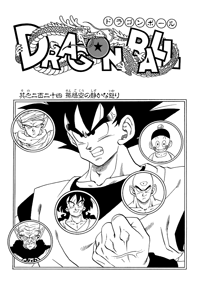 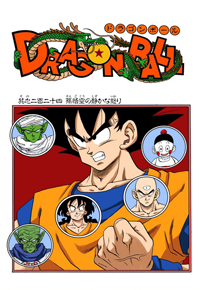 Gohan and Kuririn are really happy to see Goku, and Vegeta says he must have come to tell a stupid joke about defeating them. Goku walks over past Nappa toward Piccolo’s body, checking to see if he’s absolutely dead. “Piccolo-san died protecting me…” Goku then sees Tenshinhan and Yamcha’s bodies, and Nappa laughs that there was one more little dude, and Goku realizes Chiaotzu is also dead. And of course now God is too. Vegeta notices that his battle power is now rising, as he walks over near Nappa. Nappa thinks he wants to die, and so he takes a swing at him.

But Goku simply walks right past him over toward Gohan and Kuririn, and splits the last senzu between the two of them. Goku tells Kuririn that he’s gotten really strong, but Kuririn says it still wasn’t enough since everyone’s dead. Goku also compliments Gohan, and Gohan says Piccolo taught him well, but he still couldn’t do anything. Speaking of whom, Kuririn remembers that they can’t use the Dragon Balls anymore, and tells Goku that they’ll need to beat these guys on their three friends’ behalf. Goku says it will be just him fighting this time, but both Kuririn and Gohan object.

Goku ignores them and starts to get mad, and so Kuririn grabs Gohan saying they should leave like he said. He walks over toward Nappa, who laughs and thinks he must want to die real bad. “I won’t forgive you, you bastards…!!” Goku then starts to really power up, with the Earth shaking and rocks flying into the air as he does. Vegeta’s scouter gets to 7,000… 8,000… and then Goku stops. Nappa asks what Kakarrot’s battle power is now, and Vegeta tells him it’s 8,000, as he takes off his scouter and angrily smashes it. Goku tells him not to worry, because he’s still not using the Kaiō-Ken on him. Vegeta wonders about this “Kaiō-Ken”, and Nappa gets pissed. In a brief flash, Goku gets behind Nappa and kicks him face first into the ground. 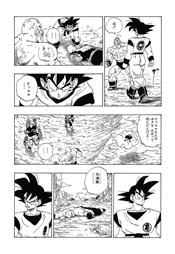 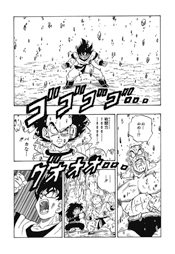 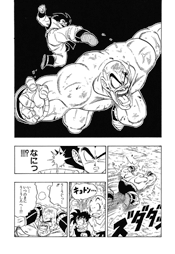