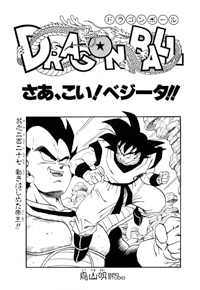 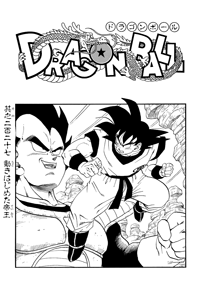 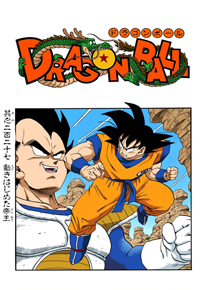 Vegeta still can’t believe this, and Kuririn asks Goku if that was a technique he learned from Kaiō. Goku explains that it’s the Kaiō-Ken, and it allows you to control all the ki throughout your body and amplify it in an instant. If you do it right, your strength, speed, destructive power, and defensive power will all greatly increase. Kuririn and Gohan are really impressed, and Goku explains that it’s not all good.

A flashback is shown of Kaiō explaining that if a mistake is made controlling the Kaiō-Ken, it will break down your body. “At the most, 2x is as much as you can go. Anymore than that will be too big a burden on your body.” Meanwhile, Nappa begs Vegeta for help. Vegeta leans in and takes his hand, and then smirks and tosses him into the air. “There’s no use for a Saiyan who can’t move!!!” Vegeta starts to power up, and sends a blast up at Nappa that causes a huge explosion.

Goku has made it safely into the air, holding onto both Kuririn and Gohan. Kuririn can’t believe he would kill his own ally. Goku tells the two of them to hurry to Kame House immediately. Gohan is reluctant, but Kuririn explains that they’ll just be in the way if they stay here. Kuririn asks Goku to change locations, so they don’t disturb anyone’s dead bodies here for when they return to life. Goku says with Piccolo and God dead, the Dragon Balls can never be used again. Gohan wonders if Kuririn doesn’t mean… Kuririn says he’ll tell Goku everything afterwards, if he’s able to beat that guy.

Goku says that in any case, he needs to win, and he’ll change locations like they asked. Kuririn says it’s bad whenever they have to leave fate all up to Goku. Then Kuririn puts out his hand and says, “Don’t you dare die, old friend…!” They shake, and then Goku pats Gohan on the head and says they should go fishing. Then Goku finally lands, and tells Vegeta they should change locations. Vegeta doesn’t care, it’ll the same result no matter where they go. The two of them fly off, and come to a rocky desert location with lots of rock formations. Vegeta laughs and says he’s chosen this place as his grave. 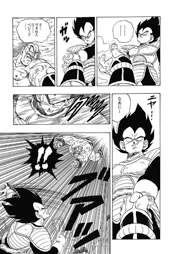 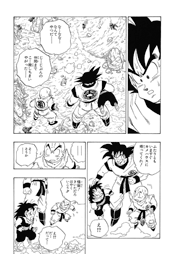 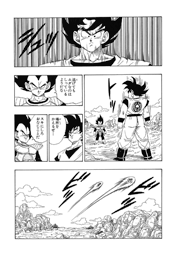