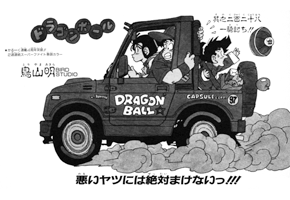 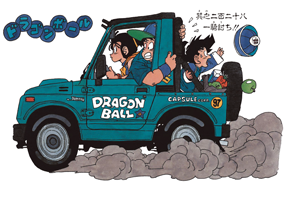 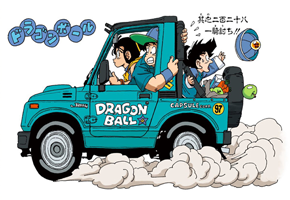 Vegeta tells Kakarrot he should be glad that a low class warrior like him is able to play with a super elite warrior. “Immediately after a Saiyan is born, he’s checked for his fighting ability. And if he’s a low numbered piece of trash like you, he’s sent to a planet where the inhabitants pose no threat.” Goku says he’s here on Earth because of that, so he’s thankful. He also says people can even surpass elite status if they work hard enough. Vegeta thinks that was a funny joke, and says he’ll show him a level that can’t be surpassed.

The two of them take a fighting stance, and then Goku rushes at Vegeta. They block each other’s punches, and then Vegeta does a few back flips to avoid a kick from Goku. They fly back toward each other, and Vegeta elbows Goku in the face. Goku catches himself before he crashes, and then heads back up into the air. Vegeta comes from behind and swings at him, but Goku ducks it. Vegeta dodges a kick from Goku, and Goku dodges a kick from him. Then they go up into the air exchanging blows. As they fight, Vegeta mocks Goku, asking where the power that he showed when he took down Nappa went.

Vegeta pounds Goku down toward the ground, and he lands safely atop a rock formation. Vegeta also comes down on a rock formation. Goku says to himself that Vegeta’s has him completely outclassed. Goku shouts to Vegeta that he’ll show him, then: he flares up, announcing the Kaiō-Ken, and then fires a kiai attack at Vegeta. Vegeta flies up out of the way, but Goku flies after him, and manages to get in a punch to the face. Goku hits him some more, and then kicks him off into the distance. Goku flies after him, but Vegeta speeds up and comes back toward Goku with a kick. They both land, and Vegeta says it’s a big disappointment if that’s all he’s got. Goku is amazed at his power, but for some reason, the desperate situation feels exciting…! 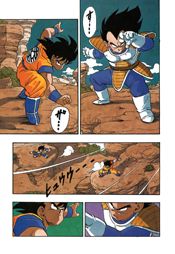 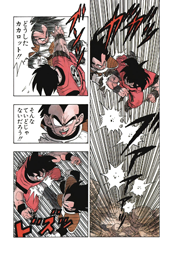 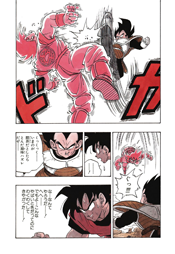