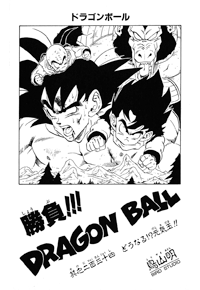 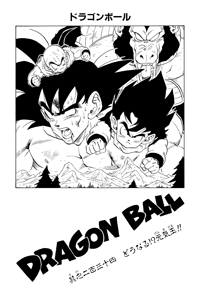 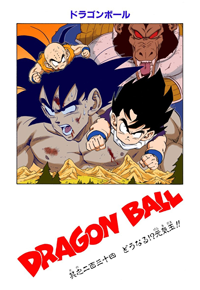 What Will Happen?! The Genki-Dama!!

Goku continues gathering genki for the Genki-Dama, and then notices Vegeta’s eyesight is beginning to return, but thinks he won’t find him so easily this far away. Vegeta’s really pissed, and can’t see him, but then he notices Goku off in the distance. Goku realizes he’s been found, but thinks he’s still got some time before he arrives. And finally Goku’s done it; he’s gathered all of the Earth’s genki. “Take this!!!!!” Vegeta suddenly fires a huge mouth blast at Goku, causing a huge explosion and blowing up the rock formation Goku was standing on.

Yajirobe is blown away, and Gohan and Kuririn continue flying back toward the battlefield. Goku hadn’t counted on an attack like that, and says all his work on the Genki-Dama has gone to nothing. Goku’s left shoulder is all busted up now, and he thinks it’s all over. Vegeta stomps over toward him, and then prepares to step on him, but Goku just barely jumps up out of the way. Vegeta quickly swats Goku into a nearby rock formation, and he falls to the ground. Goku can barely move now, and Vegeta starts stepping on him.

Gohan and Kuririn continue on toward the battlefield, and notice that Goku’s ki is getting smaller by the minute. Vegeta lifts his foot up, and then starts lecturing Kakarrot. Goku lies there, thinking this is the end, and then Vegeta prepares to smush Goku down with one of his fingers. But Goku suddenly fires a one-handed blast into Vegeta’s right eye. Goku says he has no strength left at all, and tells Vegeta to do as he likes. Vegeta’s eye is messed up now, and bleeding. He’s seriously pissed about Kakarrot damaging his face, and then picks him up in his hands and begins to squeeze him. 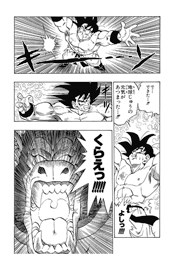 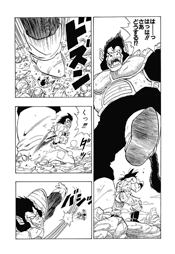 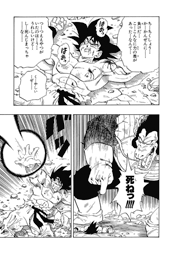