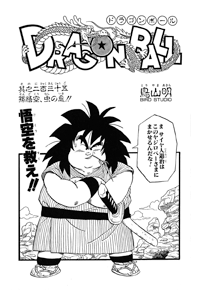 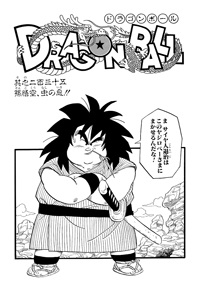 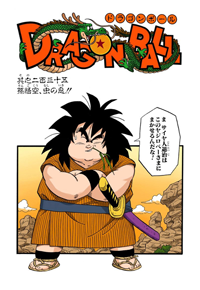 Vegeta continues squeezing Goku, as Yajirobe, who’s amazingly still around, watches. He thinks there’s nothing he can do. Vegeta then starts squeezing harder, and Yajirobe can’t bear the sound of Goku screaming in agony. Kuririn and Gohan are approaching the battlefield, and Kuririn wonders what the weird ball of light is. Then they fly in and spot Goku and Vegeta down below them, and Kuririn suddenly yells at Gohan to get down. Kuririn realizes Vegeta has become an Ōzaru, as Yajirobe watches the two of them take the ground.

Vegeta continues crushing Goku, and Kuririn and Gohan decide to run in toward Vegeta from behind. Yajirobe then suddenly runs out and yells at them that the monster over there is the Saiyan. Kuririn says they know that, and they also know that cutting off his tail will revert him back to normal. Kuririn tells the two of them to distract Vegeta from the front, while he cuts off the tail from behind. They all rush forward, except Yajirobe, who thinks they don’t realize just how strong Vegeta is compared to them.

Kuririn thinks Goku’s ki is almost completely gone, and realizes his death is near. Vegeta then notices something nearby, and Gohan shouts, “Over here!!! Let Father go!!!” Vegeta tells him he has good timing, because Kakarrot is on the verge of death, so he gets to see him finish off his father. Kuririn raises his hand into the air and forms a Kienzan, as Vegeta tells Gohan to watch closely. Then Kuririn launches it, but just before it’s about to hit its target, Vegeta jumps over it! It slices through a rock formation instead, including the one Gohan is standing on.

Kuririn and Gohan can’t believe this, and Vegeta tells them after Kakarrot, he’ll take care of them. Kuririn is pissed at the situation, and asks Goku for forgiveness in being unable to do anything. Vegeta then prepares to crush Goku between his hands once and for all, but then… Yajirobe slices off Vegeta’s tail with his sword, and then promptly runs away! Vegeta hadn’t counted on a third brat, and drops Goku to the ground as he begins to return to normal. 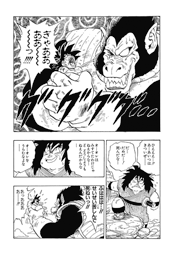 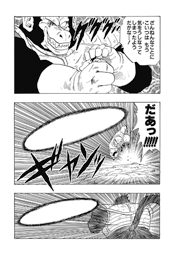 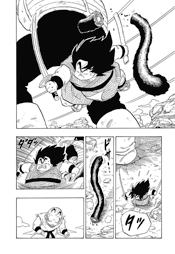