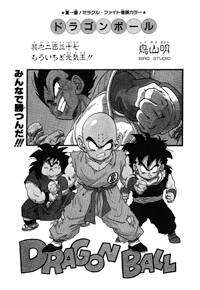 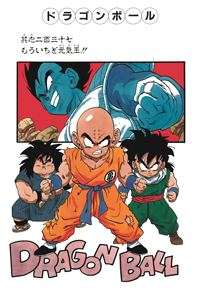 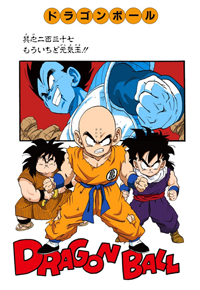 Gohan and Vegeta continue fighting, and Kuririn asks Goku what he’s talking about. Goku explains that it’s the Genki-Dama, which little by little gathers ki from the Earth. About half of it is gone, but what remains should still be enough to defeat that guy. Goku then tells Kuririn to grasp his hand. Kuririn has no idea what’s going on, and Goku yells at him to hurry up before Gohan dies. Vegeta then kicks Gohan and sends him flying. Kuririn takes Goku’s hand, and Goku grunts in pain. Kuririn says his bones are broken, but Goku tells him to hold on nevertheless.

Goku’s hand starts to glow, and then suddenly Kuririn’s does instead. Kuririn freaks out and thinks this is amazing, and Goku tells him to concentrate and he can make it into a ball. Vegeta knocks Gohan toward the ground, but Gohan catches himself from landing hard. Gohan wishes Kuririn luck, since he can’t really control his ki. A ball then pops out of Kuririn’s hand; it’s the Genki-Dama. Vegeta gets pissed and flies at Gohan with an elbow to the face.

Goku asks Kuririn to please hit Vegeta with that, as he can’t make another Genki-Dama, and Kuririn promises to try. Gohan gets up, and can’t believe how strong he is, as Kuririn flies up to the top of a nearby rock formation with the Genki-Dama. Vegeta charges at Gohan, and launches a blast his way. Gohan just barely dodges it, and fires off a Masenkō back at him. Vegeta prepares to take it head on, but actually dodges it at the last second.

Kuririn is pissed that he can’t launch the Genki-Dama, but then someone telepathically tells him not to aim with his eyes, but to feel the evil ki and fire at that. “I’m the person who taught Son Goku the Genki-Dama, Kaiō.” Kaiō tells Kuririn that everything rests on that Genki-Dama, and it’s full of the Earth’s wishes. Vegeta approaches Gohan again, as Kuririn prepares to launch the Genki-Dama. Vegeta puts both hands at his side, and then repeatedly fires off blasts from each of them over at Gohan.

Gohan just barely avoids all of this, being blown back a bit by the explosions of each. Kuririn continues to try to concentrate, as Yajirobe spots Kuririn up atop the rocks holding the Genki-Dama. The blasts stop, and Gohan is down. Vegeta then rushes at him, telling Kakarrot to watch as he finishes off his son. Kuririn suddenly feels it, but then Yajirobe yells up at him, “What the hell are you doing, dumbass!!! Hurry up and do it!!!!” Vegeta hears him and stops, just as Kuririn launches it. And Vegeta attempts to dodge it at the last second… 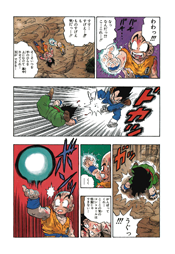 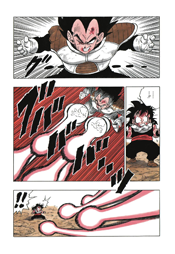 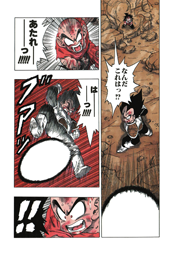