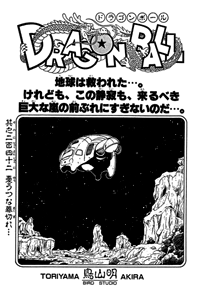 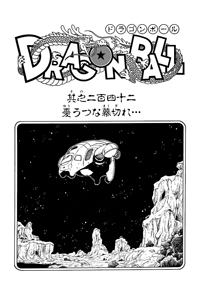 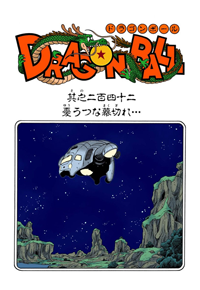 The little plane lands and Chi-Chi immediately runs out, jumps over Goku, and heads straight to Gohan. “Gohan-chan!!! Gohan-chan!!! Are you okay!!! Hold it together!!! Ma’s here!!!” Kuririn tells her that Gohan’s okay, but it’s Goku who’s in really bad condition. Chi-Chi says she won’t let him leave her side ever again so bad things won’t happen to him anymore, while Kuririn mumbles more about Goku. Kuririn walks over to Goku, where Bulma, Karin, and Kame-Sen’nin are, as Goku tells them the Saiyan got away. Kuririn tells Bulma that Yamcha, as well as everyone but the four of them, were killed.

Bulma isn’t worried, because they’ll just use the Dragon Balls to return them to life again in one year. But Goku breaks it to her that Piccolo is dead, meaning God is dead, and the Dragon Balls are gone. Bulma says it must be a lie. Four of them survived and since all she can see is Gohan, Goku, and Kuririn, the fourth must be Piccolo! But then Yajirobe comes up to her from behind and says he’s the fourth. Bulma can’t believe this and starts wailing about Yamcha being dead. Kame-Sen’nin can’t believe he survived over Piccolo, and then Yajirobe asks if they’d like it better if he was Piccolo. Yajirobe goes on that if it weren’t for him the other three wouldn’t be alive right now. Karin hushes Yajirobe, and says they need to get the injured to the hospital, since there’s no more senzu.

Everyone is in the plane again and it is now night outside, with Kame-Sen’nin piloting while Bulma is still crying. Kuririn is directing him towards everyone’s dead bodies and he tells Bulma not to cry, as he has some unbelievable news — there may be a way to bring everyone killed by the Saiyan back to life. Goku remembers Kuririn saying something like that before and wants him to tell them about it. But Kuririn says it will have to wait since they’ve arrived where everyone’s bodies are, and tells Muten Roshi to land.

They’ve gathered everyone, except Chiaotzu, whom Kuririn explains had blown himself up, thus there are no remains. Kame-Sen’nin is really pissed as he looks at the bodies in the refrigeration units and Bulma says she’ll pilot this time since she’s the more level-headed one this time. Some time passes and then Gohan wakes up. He wonders what he’s doing here in his mother’s lap and asks about the Saiyan. Kuririn explains that everything’s okay and he got away. Gohan asks about his father, and Goku says he’s behind him. Yajirobe asks Chi-Chi why she’s only worried about her son and not her husband. She yells at him that it was Goku’s fault that Gohan was hurt by the bad guys, and Gohan insists it’s not. She’s more concerned with Gohan’s future than the Earth’s. Yajirobe asks Goku if it’s okay to hit her.

Bulma then asks Kuririn to explain what he had mentioned earlier. “Those two Saiyan seem to have learned from Goku’s older brother’s radio about the Dragon Balls, and that they grant wishes… So, they came here to get the Dragon Balls. But then, they said something strange when they saw Piccolo’s face… ‘He’s a Namekian.’ Piccolo and God are both aliens it seems… What they said afterwards was more important… ‘So that saying about Planet Namek having mysterious balls that grant any wish must be true… So then, we can just go to Planet Namek.'” Yajirobe doesn’t believe it, but Gohan says he heard it too, that the Namekians created the mysterious balls.

So Kuririn says if they were somehow able to go to Planet Namek, they could probably get find Dragon Balls there and everyone can be returned to life. Gohan gets excited that even Piccolo will come back. Kuririn says that would also bring God back, and the Dragon Balls here would be restored too! But, Bulma hates to break it to him that he’s just dreaming. She asks him how he’ll find out where this planet is. Goku says he’ll contact Kaiō to ask the location, since he is sure to know. 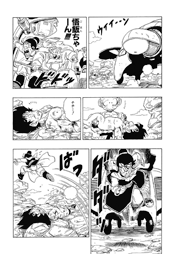 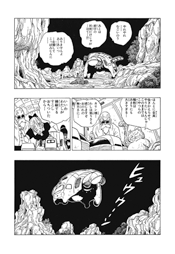 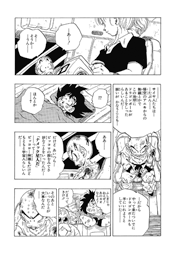