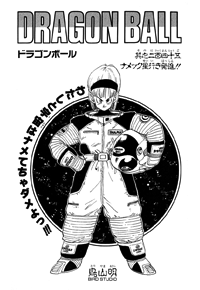 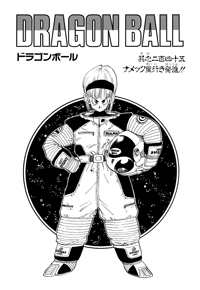 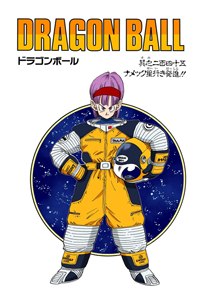 Back in the hospital room, Bulma says they can make it to Planet Namek in only one month. She just needs to remodel the space ship a bit, and then they can take off in five days. Kuririn is excited, and Karin says it seems there’s a small light of hope. Bulma asks Mister Popo if he’s going to Planet Namek, but he says he’s not going. Bulma can’t believe this, as he’s the only one who can speak Namekian. Mister Popo insists he can’t leave God’s palace alone for two months time and offers to teach her Namek. Kuririn says Bulma needs to go because of her great knowledge of mechanics and stuff, and she says okay, but it’ll be dangerous… she’ll have to make a shower room and a bed and a stereo.

Bulma insists she can’t go by herself, though. Yajirobe says he’d go, but he can’t, and Karin says nobody would want to go with him anyway. Kame-Sen’nin thinks about the two month roundtrip and says there’s no way around it, he’ll have to go. Bulma yells at him that it would be too dangerous for him. Since Son-kun’s in bad condition, she tells Kuririn to come. Kuririn doubts he’d be much use if they bump into the Saiyan again. Goku wants to go too, but he can’t right now. Goku thinks it would be better if they both went, though. Gohan asks to please take him with and Chi-Chi thinks he must be joking.

Gohan insists it isn’t a joke and says he wants to wish back Piccolo. Chi-Chi then starts yelling at him, about how she’s already spent one year worrying about him and she doesn’t want another two months of that. He’ll also fall way behind the other kids on his studies and she won’t allow such a thing. She yells that he has nothing to do with that Piccolo and he’s just a little kid, as Goku’s temper starts to flare. Gohan suddenly yells, “Shut up!!!!!” Chi-Chi gets quiet, and thinks Gohan has turned into a delinquent. Gohan tells her he must go and help bring everyone back to life. He can fight, and he must do something. Gyūmaō agrees that she should let him go and Goku thinks Gohan really has gotten strong.

Bulma thinks it’s all settled and says that since she needs to fix the Namekian language input, they’ll meet up in ten days at Kame House. Some time passes, and Bulma and her father and some other workers all work on modifying the space ship. “And finally, the day of departure…” Bulma is at Kame House with the space ship and Kuririn is packed and ready to go, looking at the space ship with Kame-Sen’nin and Umigame. Kuririn asks Bulma about her haircut (short and straight now) and she says it’s extremely cool. Kuririn asks if she thinks its okay he brought an umbrella, in case of the weather, and then they notice Gohan’s arrived along with Chi-Chi and Gyūmaō.

Gohan is dressed in a fancy little suit with a bow tie and has a new flat bowl haircut. Bulma falls over and Kuririn almost doesn’t even recognize him. Chi-Chi says he’s dressed up all nice because the aliens have never seen a human before. Bulma sits up, exhausted, and says they should go now. Kame-Sen’nin shakes Kuririn’s hand and tells him to find the Dragon Balls. Gohan tells everyone goodbye and Chi-Chi promises to send him a letter every day. Inside the ship, Kuririn and Gohan look around. Kuririn asks where to put his bag and Bulma says it doesn’t matter, just hurry and sit down.

Bulma tells the control pad, “Departure in five seconds. Destination Planet Namek.” It suddenly blasts right off into space. Kuririn wishes they had seatbelts, and Kame-Sen’nin can’t believe their speed. Up in the ship, Bulma says they can now do as they like and goes into another room to change. Kuririn thinks she’s going to put on pajamas, and remembers he forgot his pajamas. Gohan also decides to change, but into an outfit he made without his mom knowing, just like Piccolo’s. Bulma comes out, not wearing pajamas, but an outfit that looks like it’s meant for adventuring. And so begins their journey to Planet Namek… 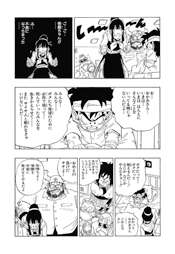 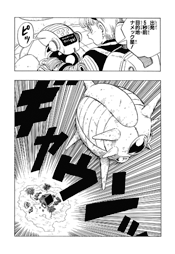 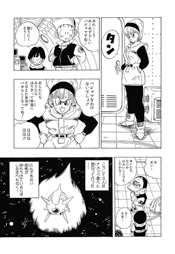