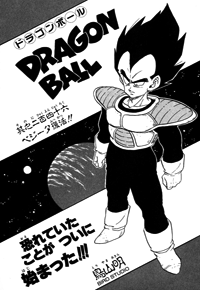 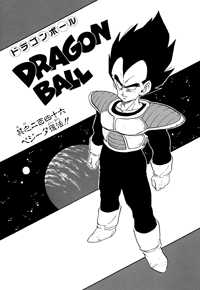 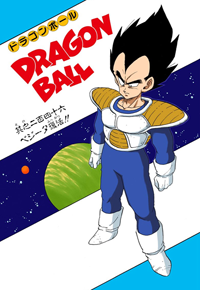 The voyage continues and Bulma wakes up from a nap. She has all kinds of magazines and trash from junk food all over the floor around her bed, and she stands up, complaining about how it’s the seventh day and she can’t take another twenty. She thinks she should make some long-term sleeping device or something. She notices Kuririn and Gohan are both sitting quietly doing image training. Finally Kuririn stops and catches his breath and says Gohan’s really strong, being Goku’s kid and having learned from Piccolo. Gohan says Kuririn has all kinds of techniques, though. Bulma says his head is good for filling with training.

Bulma tells them they need to tidy up the place, since she’s a lady. Kuririn says she’s the one who’s made all this mess and they’ve actually been cleaning up after themselves, besides she did say she was bored… Bulma yells at him that they should be kind to a delicate lady such as herself. She stretches and then walks away, and Kuririn comments that a lady shouldn’t be strutting around in her underwear. Bulma, now sitting in the main seat, asks where this Vegeta guy ran off to, since the Saiyan planet is gone. Bulma then remembers how Son-kun’s brother had said they clear planets of their inhabitants and sell them to aliens. She wonders if he isn’t getting help from those aliens.

Meanwhile, Vegeta’s space pod is now eighteen days from Earth, and it arrives at Planet Freeza No. 79. Two aliens wearing armor and scouters like the Saiyan are playing a game, when they hear an alarm beeping. They go over and check it, and wonder if it’s Freeza. But the ship arriving is round, so it’s a fighter. The signal must mean its Vegeta, but one of the guys thinks something must be wrong, as he didn’t give notice of his return. The other guy radios someone saying “This is the control room!! Vegeta-sama is now arriving!! Hurry and meet him!!” Elsewhere on the planet, some other guys watch his space pod crash down, but note that there’s only one and wonders about Nappa. They’re also only getting a small life reading from Vegeta, so they look inside and notice he’s hooked up to life support, so they rush him to the medical room.

Vegeta is now naked in a healing pod and the guy attending the machine stops it and drains the fluid. Vegeta opens his eyes and steps out, and the guy tells him he couldn’t restore his tail, but Vegeta says it’ll come back eventually. Vegeta starts to get dressed and asks if Freeza is around. The guy says Freeza has left and mentions that Kewi said he should come to the training room. Vegeta says to tell Kewi he doesn’t take orders from him. The guy tells Vegeta he’s forgotten his scouter, but Vegeta tells him to keep it.

Vegeta walks through the halls of the base, thinking of how this time he’ll take care of those Earthlings. Then he stops, and some scaly catfish-looking guy greets him and laughs about the hard time he’s had. He mentions both Raditz and Nappa being dead, and asks if the great invincible Saiyans have been hurt. “Go away, Kewi. I don’t have time to associate with the likes of you.” Kewi halts him and tells him that Freeza is pissed about their selfish actions, and Vegeta says he’s not even here. Kewi continues that Freeza is very lenient, and he’ll let Vegeta slide because of the great things he’s learned from him. Kewi says Freeza was so happy to learn that he may be able to attain eternal youth and life, on Planet Namek!

Vegeta’s pissed that Freeza heard the conversation through his scouter. Kewi says that eternal life was also Vegeta’s desire and laughs that he should give it up, because afterwards Freeza will wipe out all of the Namekian people. Vegeta then rushes out of the hall and into his space pod. “I won’t allow that…!!! That’s mine!!!” Meanwhile, on the thirty-fourth day, Bulma and everyone finally reach their destination, Planet Namek. 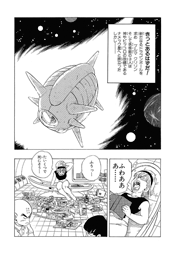 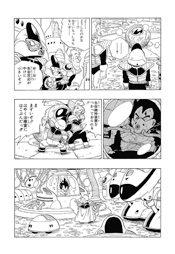 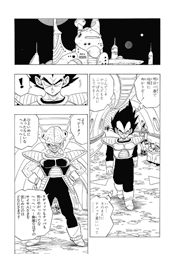