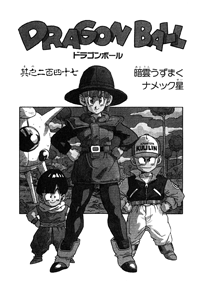 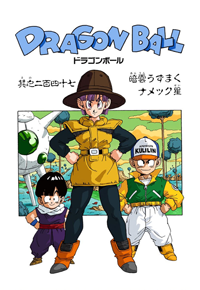 The ship continues approaching Planet Namek, and Gohan and Kuririn actually get to put their seatbelts on this time as they enter the atmosphere. They land kind of hard, but it’s a successful landing nonetheless. Bulma starts preparing some special masks to breathe in the atmosphere here, but Kuririn and Gohan are already outside the ship, breathing just fine. They talk about this being Piccolo’s home planet, until Bulma comes out and yells at them for just coming out here without thinking. She pulls out the Dragon Radar to start searching for the Dragon Balls and Kuririn whispers to Gohan that she seems angry again. Bulma then gets excited that the Dragon Radar is detecting the Dragon Balls here as well.

Kuririn and Bulma start dancing and celebrating, but then Gohan interrupts them. He feels a strong ki over that way, a bunch of them. Kuririn then notices it too and wonders what’s going on. Bulma says there’s nothing to worry about, it’s just the Namekians. Kuririn says they feel evil, but Bulma says Kaiō said they’re all peaceful. The radar says there’s four Dragon Balls gathered, not even in that direction. Bulma thinks they should meet the Namekians and Kuririn laughs about being worried over nothing. But then something suddenly bursts through the air and Kuririn yells out that it’s a Saiyan space ship.

Bulma freaks out and Kuririn tells Gohan to lower his ki. Kuririn says it must be Vegeta and Gohan can’t believe his injuries are already healed. Bulma says they have to go back to Earth, but Kuririn tells her to go back by herself; they need to stay here and gather the Dragon Balls. Bulma says she’ll contact Kame-Sen’nin and then come back in two months with Goku. They don’t particularly like the idea of two months. Meanwhile, Vegeta has emerged from his ship, not about to let that bastard Freeza get the Dragon Balls. Freeza’s probably found out about his mutiny by now and probably plans to kill him. Vegeta doubts he can beat Freeza, though it won’t matter once he’s been granted eternal life by the Dragon Balls.

He’s brought a scouter after all and he uses it to find Freeza. Vegeta finds out where he is, and that he’s brought Zarbon and Dodoria with him, then flies off. Back on Earth, at Kame House, Kame-Sen’nin picks up the phone, and Bulma tells him the situation. She says to tell Goku and everyone about this, except for Chi-Chi. Suddenly they all spot a second space pod like Vegeta’s crash down somewhere. Elsewhere on the planet, in a village, some Namekians are lying on the ground dead. There’s a bunch of various kinds of aliens standing around, all dressed in armor like the Saiyan had, and one comes out of a house carrying the Three-Star Ball.

A tiny little effeminate guy floating in a pod thing says they only have three left. He is surrounded by a long-haired pretty boy holding the Five-Star Ball and Two-Star Ball and a big fat ugly guy holding the Seven-Star Ball. The little guy tells the fat guy to hold onto the Three-Star Ball, addressing him as “Dodoria-san” and says that Vegeta is surely after these. The pretty boy calls the little guy Freeza, saying that Kewi has arrived and is pursuing Vegeta. The pretty boy continues that those must be the two large powers that just arrived. Just before them, two large powers appeared but suddenly vanished. Freeza says the only problem should be dealing with Vegeta, though. The pretty boy says Kewi’s after him, and those two have hated each other from the start. Kewi’s ship has crashed down right next to Vegeta’s and he checks his scouter and says they’re about even in battle power. Nevertheless, he’ll win. “I won’t let you get away, Vegeta! I, Kewi-sama, will finish you off…!” 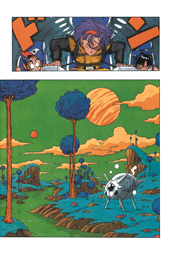 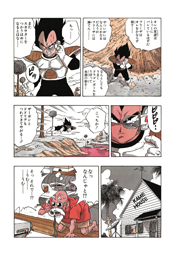 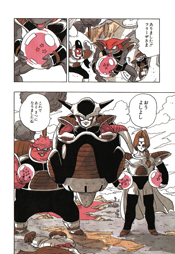