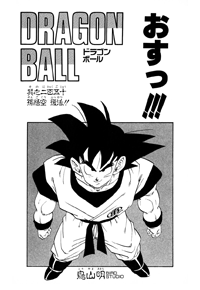 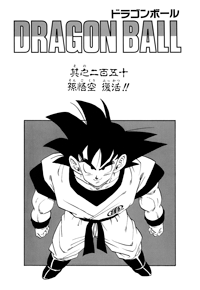 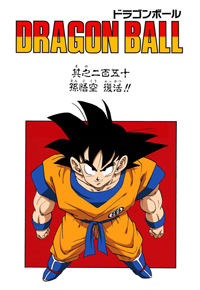 The three of them hurry inside the cave, and Kuririn thinks they must be on the same side as those two from before. Kuririn wonders if they’ve been found, as they all press up against the cave walls, but the group flies right past the cave. Bulma is relieved they weren’t after them, but wonders what they’re doing instead. Kuririn and Gohan suddenly get a bad feeling, and Kuririn asks Bulma-san to confirm it with the Dragon Radar. They wonder if the group had the four Dragon Balls they saw earlier… and they do.

Kuririn asks Gohan if he noticed the second guy from the front (which was Freeza), and Gohan did, saying he felt an incredible amount of strength. Kuririn says he’s much worse than Vegeta and he couldn’t even move in that instant because of him. The others were all awesome, but he was much different. Bulma can’t believe there are people stronger than Vegeta, and Kuririn says they’re probably his allies, since they have the same outfits. Bulma then notices on the radar that they’re headed straight for another Dragon Ball. They think they must have a radar, too.

That location is about fourteen kilometers from them and Gohan says it’s the place where Kuririn had felt the Namekians before. Kuririn says he’s going there and Gohan says he will go with him. Bulma can’t believe they’re just going to leave her here alone, and Kuririn tells her it’s safer here. She then agrees and says she’ll make a house capsule. Kuririn asks her to contact Muten Roshi, and she tells them to be careful. Kuririn says they need to hurry while holding back as much ki as possible, and they dash off.

Back on Earth at the hospital, Goku is still all bandaged up and sitting on the floor doing sit-ups. The doctor comes in with a nurse and says he’s overdoing it again and tells Goku he still can’t leave the hospital. The doctor says he doesn’t believe this nonsense about fighting aliens as he helps him back into bed. The doctor asks about his wife and Goku says she got bored and went shopping. Then Kame-Sen’nin walks in the door and notices Chi-Chi’s not here. He has brought a sponge cake as a sympathy present. He tells Goku he got a message from Bulma two hours ago, as he grabs the nurse’s ass. She screams, and Kame-Sen’nin asks if he did something, since he doesn’t know what he’s doing sometimes at his age.

Kame-Sen’nin tells Goku that Bulma and co. arrived on Planet Namek, but they weren’t the only ones who arrived. Vegeta is also there. Goku freaks out and Kame-Sen’nin says that’s not all, Umigame radioed him on the way here that they received a new message from Bulma. There are about ten other people besides Vegeta on Planet Namek, seemingly on the same side as him. They also broke their space ship so they can’t return to Earth. And one of them has a ki much greater than Vegeta’s. Goku can’t believe all this. Yajirobe then comes in the room with a bag of seven senzu from Karin. Goku says he has great timing and asks to eat one right now. The doctor gets pissed about him giving weird things to a patient.

Goku eats it, flips out of bed, busts out of his bandages, and then gets changed into his usual dougi. He declares he’s going to Planet Namek and tells Yajirobe he’ll need the remaining senzu as well. Kame-Sen’nin asks how he plans to get to Planet Namek and Goku says Bulma’s father offered to make him a space ship as a sympathy gift. Not like God’s, but from the two remaining space ships here on Earth (his older brother’s, and the one Goku had used as a baby). Raditz’s ship exploded, but his own was okay, with some modifications. Goku says he can make it to Planet Namek in six days, then hops out the window and calls for Kinto-Un (the nurse and doctor freak out), saying he’s going to help. Yajirobe asks what he meant by “going to help”, and Kame-Sen’nin explains it all. Yajirobe doesn’t like his odds, as Goku flies along, thinking about someone being even stronger than Vegeta. 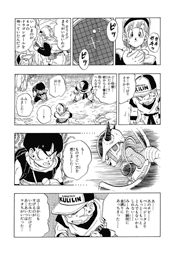 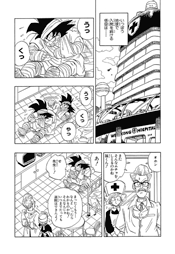 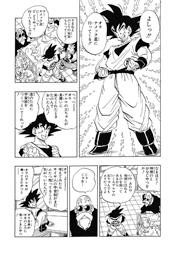