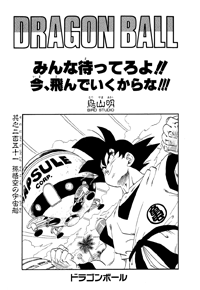 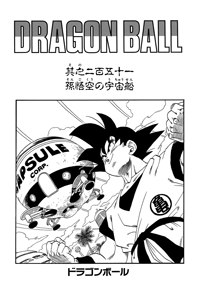 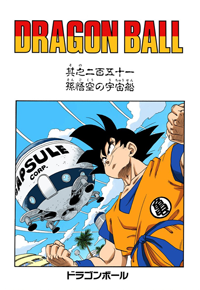 Goku approaches Capsule Corp, hops off Kinto-Un, and starts walking around outside, wondering where it is. He spots Bulma’s Mom watering flowers and she asks Goku how he’s doing. He asks her where Bulma’s Dad is, and she says he’s still working on the space ship. Bulma’s Mom grabs Goku by the arm and walks with him, saying how little Goku has grown up so nicely, and they should go on a date after he defeats that Saiyan. They finally arrive at the space ship and Dr. Brief is surprised he’s already all fixed up.

Goku asks if it isn’t already complete, since it looks good enough to him. Dr. Brief steps out and says he needs a bit more time, and asks Goku to come in. Bulma’s Mom then leaves and says she’ll go fetch him a drink or something, as well as Puar and Oolong. Goku steps inside and says it’s huge, and Dr. Brief says it’s just as he requested. Goku thinks it’s perfect for training and Dr. Brief notes that Saiyan science is impressive. Goku asks him if he’s finished the artificial gravity stuff, and he says he has. Dr. Brief brings him over to a panel in the center and says this is the artificial gravity switch, and this one is the controller; it can go up to 100G. Dr. Brief tells him it’s crazy, though. If he weighs about sixty kilograms, at 100G he’ll weigh six thousand kilograms, or six tons!

Goku says it’ll be alright, because he can’t beat the Saiyan without it. Goku asks if it still can’t fly. Dr. Brief says it can and that all of the data has been inputted, so all Goku has to do is press the switch and he’ll arrive at Planet Namek. Dr. Brief then points down some stairs, and says clothes, a bathroom, a kitchen, and a bedroom are all down there. Goku asks what the holdup is then. “I still haven’t decided where to put the stereo speakers.” Goku freaks out that that’s all and says he needs to leave right away. Dr. Brief asks if he’s just going to give up the stereo and Goku explains that they got a message from Bulma: the three of them arrived on Planet Namek okay, but then so did the Saiyan from before, and some of his allies. On top of that, their space ship’s broken!

Dr. Brief says that’s awful, and Goku says to hurry and tell him how to take off, as Dr. Brief still asks if it’s really okay without the stereo. Goku sits down in the pilot seat and presses the button, and the ship blasts off into the sky. Dr. Brief looks up at it from the ground, impressed that it really flew. Puar and Oolong come out there wondering what all the racket is and see the space ship flying away. Dr. Brief says Goku just left, and Oolong thinks he was pretty rude, but Puar is worried that something happened. Meanwhile, Goku is already pretty far from Earth and realizes it’s really dark here in space, and wonders if it’s night. He decides he needs to start training right away. Kaiō’s place was 10G, so he decides to start at 20G. He walks around, and then starts doing some push-ups and sit-ups.

Back on Namek, Kuririn and Gohan continue dashing towards their destination. Kuririn says they’re close, so they need to completely hide their ki and walk the rest of the way. They walk up a small cliff, crouch down, and look down from it at a bunch of houses that look just like their space ship. They notice a group of guys down there, and especially take notice of Freeza, Zarbon, and Dodoria. Kuririn points out that Dodoria and Zarbon have Dragon Balls, huge Dragon Balls. Dodoria suddenly gets a small reading on his scouter and looks up at the cliff, but the signal disappears. He thinks it must be a small animal or a bug. A guy comes out of one of the houses and says he’s found only five of them remaining, the rest are gone it seems. Kuririn notices the Namekians and how they look just like Piccolo and God. 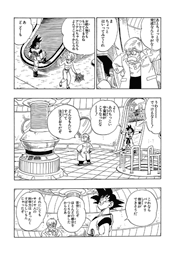 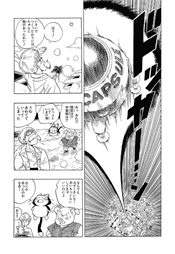 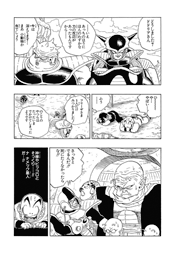