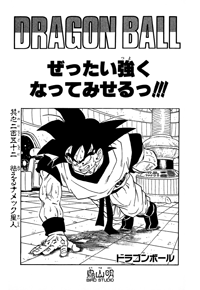 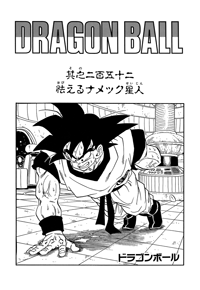 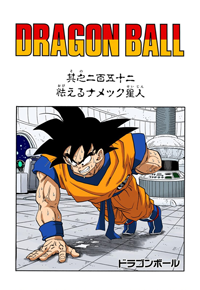 The five Namekians are three older men and two children, and Kuririn wonders what they want with the Namekians. Gohan asks if they’re Saiyan and Kuririn tells him they just wear the same clothes. Vegeta’s the only remaining Saiyan, save him and Goku. Kuririn reminds him of what Goku’s older brother had said about how they wiped planets of their inhabitants to sell them, and thinks these guys must be involved in that. But Vegeta doesn’t seem to be here, so Kuririn wonders if he is searching for a Dragon Ball somewhere else.

The older Namekians notice that Zarbon and Dodoria are holding two Dragon Balls each, and Freeza introduces himself, saying he’s after their Dragon Ball. Freeza asks what happened to the others, since there were supposed to be ten here, but they won’t answer him. “You don’t plan to say anything? I’ll kill you.” The one eldest starts to speak, but in Namekian. Freeza says they don’t understand Namekian and tells them he knows they can speak in their language. The leader then tells him that the others went to work in the fields, while they, just the elders and children, stayed behind. Freeza thanks him for answering and says he should continue to answer his questions.

Freeza then asks where the Dragon Ball is, but the leader says there isn’t one here. Freeza tells Dodoria he can have some fun and kill a second Namekian, and Dodoria says that was the fate of the last person who tried to be a hero. Freeza tells them that they will be killed if they don’t cooperate and explains what he’s heard about this planet: “The seven Dragon Balls that were created by this planet’s Eldest are held by the seven elders that live here. Each one will test your wisdom, strength, and asks the motive of your wish. If each elder approves of all of these qualities, then you may receive the Dragon Ball.” Freeza says that even so, he’ll kill them if they don’t hand it over. He had a lot of trouble with the first Dragon Ball, but the next three were very easy since the people were cooperative.

Elsewhere, Vegeta is listening intently to this whole conversation on his scouter. The Namekians refuse to believe the other elders would hand the Dragon Balls over to them so easily, so Freeza asks Zarbon to show them what happens when they get disobedient. Zarbon suddenly appears behind one of the men and kicks him hard to the face, breaking his neck and killing him. Another man gets pissed and tries to attack Zarbon, so he tosses one of his Dragon Balls into the air. The man blasts at Zarbon, but Zarbon takes to the air and the blast hits a random henchman instead. Zarbon then blasts the man with his free hand, frying him to death. He lands and casually catches his Dragon Ball. All that’s left is the leader and the two children, who are clinging to him. Freeza asks if he’ll be more obedient now.

Freeza thinks there should be nothing else in the way of his being granted eternal life now. Kuririn hears this and says that was also Vegeta’s wish. Gohan thinks they might not be allies after all. The leader tells Freeza he’d rather die than hand over the Dragon Ball to guys like them. Freeza says it seems he’s chosen death and he’ll just have to kill all of the stubborn people on this planet, including the children. The leader freaks out that he’d even kill the children, and Gohan and Kuririn start to get really pissed. Dodoria then picks up some strong battle powers on his scouter. They look behind them and three young Namekians are flying in towards the village. 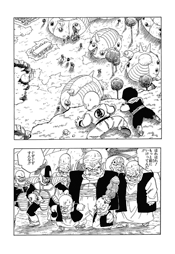 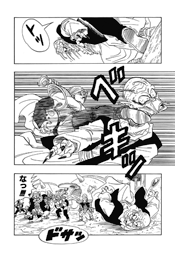 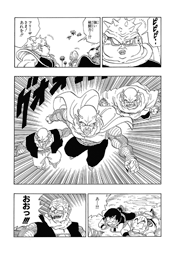