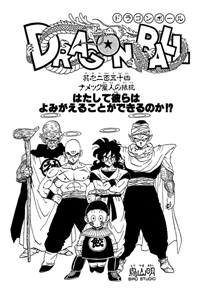 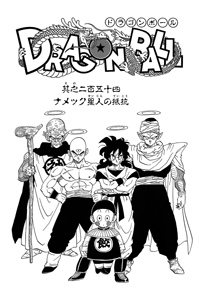 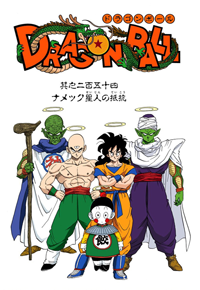 Zarbon yells out that the target is the scouters, and Gohan notes that that’s the thing that detects opponent’s strength and location. Kuririn realizes that it wasn’t that they had a way to find the location of the Dragon Balls, but they were searching out the Namekians themselves with the scouters. Dodoria gets pissed and threatens to kill them all, then flies up into the air after the elder. Freeza yells at him to wait and kill the three young ones first. Dodoria comes back to the ground and faces them, and tells them it should only take ten seconds to take care of them. But one of the Namekians says he thinks the three of them can stand their ground against him.

“You think you can hold your own against me, you say? What a great joke!” Dodoria suddenly appears behind one of them and puts his arm straight through his chest. He pulls it out and fires a huge mouth blast at the next Namekian. Finally he swipes at last Namekian, but he jumps up into the air and starts running away. Dodoria chases after him, so he turns around and throws a two-handed ki blast at Dodoria. There’s a giant explosion and the man thinks he’s won, but when the smoke clears Dodoria is unharmed. Dodoria flies straight at him and headbutts him straight into a hillside, killing him. Freeza tells the elder he must realize it’s pointless to defy him any further and asks him to come down. The elder hesitates a bit, but finally comes back down to the ground and Freeza’s glad he’s being a little more obedient.

“You’ve broken our very important scouters. Don’t you think you should apologize and hand over the Dragon Ball? You probably already know how we work, right? So, if you’re stubborn, the children will die next.” The elder relents, so long as they promise to leave the children out of this. Kuririn asks Gohan if he notices a weird ki rising; it’s not extreme, but it’s more than a match for them. The elder then gives the Four-Star Ball over to one of the henchman and Freeza asks him to tell them where the other two Dragon Balls are. The elder refuses to sell out the other Namekians and Freeza says he’ll just have to die, along with the children. The elder freaks out at hearing this, when Dodoria suddenly attacks him. 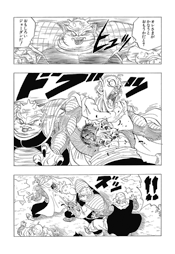 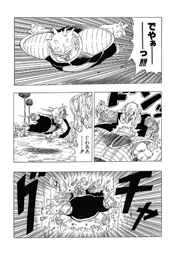 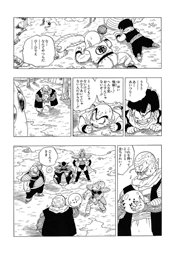