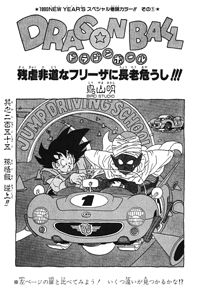 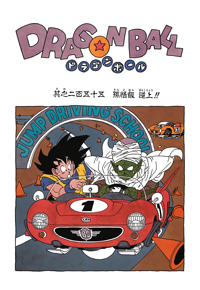 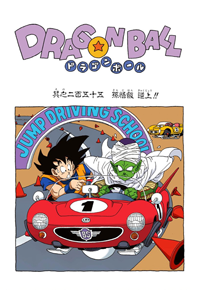 Son Gohan in a Frenzy!!

The elder goes flying back a bit, with little damage. He tells Freeza this isn’t what he promised; he said he’d leave after he had the Dragon Ball. “But without all seven Dragon Balls, there’s no point, right? Since you’ve broken our scouters, you should tell us the location of the remaining two Dragon Balls.” The elder says he should’ve said so, but he would still rather die than tell them. Freeza says he’ll have to grant that wish, then. Zarbon asks if they can really search for the Dragon Balls without scouters and Freeza tells him they’re sure to find something if they search for the other villages or Namekians. For now, Freeza wants these three killed.

Kuririn is pissed and the elder tells the two kids to run away. Then the elder stands up and yells, “I’ll show you the pride of the Namekians!!!!” Freeza then fires a small blast towards the elder, but it goes over his shoulder and hits one of the kids. The other kid yells out about Cargo dying, as Gohan starts to get really pissed. Dodoria then grabs the elder, gets him in a headlock, and breaks his neck. He laughs and drops the elder to the ground. Kuririn tells Gohan he needs to hold back, since there’s nothing they can do. The remaining kid then cries and tries to run away, so Dodoria chases after, then appears in front of the kid.

Dodoria prepares to attack him, and then Gohan stands up and screams, “Stooooop!!!!!” Gohan takes to the air, and Freeza and Zarbon look toward him. Dodoria wonders where the person is, and then Gohan suddenly flies in and kicks him in the face, knocking his head through a house. Kuririn thinks he’s an idiot and goes in to help also, as Dodoria recovers and asks who the Hell he is. Gohan says he’s going to beat him up, and Dodoria starts to stand up, when Kuririn flies in with another kick to the face. Kuririn then grabs the kid and tells Gohan they need to run away, and so the three of them fly off. Freeza says they aren’t Namekians. Dodoria gets up again, pissed, and Freeza yells at him to go chase and catch them, so he flies off as well. Kuririn tells Gohan to speed up, because if they’re caught, it’s all over. And then Dodoria has already nearly caught up to them, as Freeza wonders who those two were. 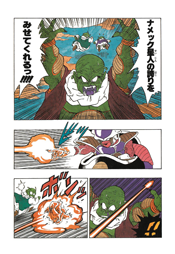 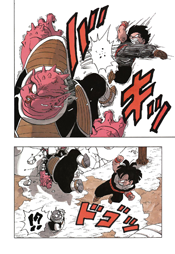 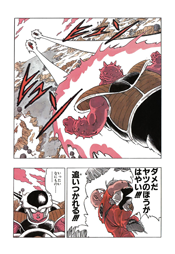