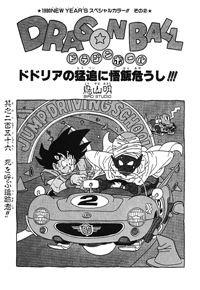 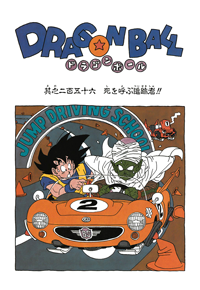 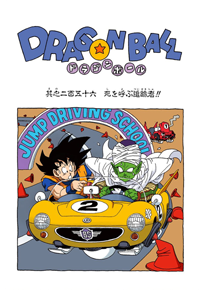 Dodoria has nearly caught up, and Gohan thinks they should land and fight him. Kuririn says they’re no match for him at all and they need to just keep flying. Kuririn is pissed and thinks about how he needs to give this kid to Gohan, and then suddenly gets an idea, as Dodoria gets even closer. He throws the kid over to Gohan. Kuririn yells at Gohan not to look in his direction and close his eyes. Kuririn then puts his fingers to his face, turns around towards Dodoria and says, “Take THIS…!!!!! Taiyō-Ken!!!!!” Dodoria is suddenly blinded and Kuririn speeds up to catch up to Gohan and the kid, and says they should hurry and hide while they have the chance.

The three of them then land at the foot of a nearby mountain, as Dodoria starts to regain his sight. He can’t find them, and gets pissed. He then starts flying in circles around the area, screaming at them to show themselves. Gohan tells the kid it’ll be okay, he can’t find them since that elder broke all of the scouters. Dodoria gets pissed about trying to find such small guys in such a big area, and then decides he’ll just blow everything up. He flies straight up into the air, and Gohan thinks he’s given up and left. Kuririn is worried, however. Dodoria stops way up high with a good vantage point and fires a huge blast straight down.

All of the little surrounding islands are blown up, leaving nothing but ocean. Dodoria remembers Freeza said to bring them back, but thinks it’s okay if they’ve escaped. He says he didn’t know their “true form”, and thinks they weren’t normal. Meanwhile, everyone is still alive up in the air behind Dodoria. Dodoria then flies off, and they’re all relieved. Kuririn says they should go back to Bulma’s location for now, and asks the kid if he can fly. He says he can, and thanks Kuririn for saving him. Kuririn says to save his thanks for Gohan, since he’d thought it was too dangerous. But Gohan says if Kuririn weren’t there, they would’ve both died. Kuririn says they should head back now, and Gohan remembers where Bulma is. Dodoria, meanwhile, wonders about finding the Dragon Balls without a scouter as he flies along, when suddenly, he’s knocked straight down into the water. He makes his way back up to the surface and climbs ashore, only to find Vegeta standing in front of him. 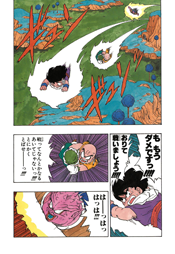 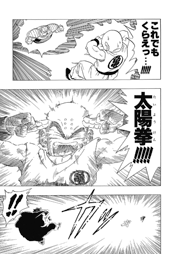 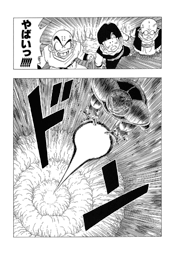