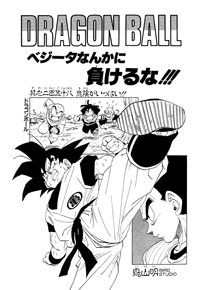 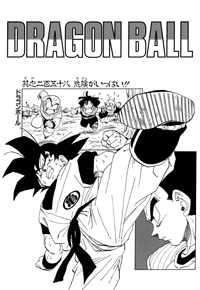 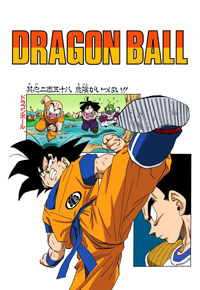 Vegeta marvels over his power at being able to kill Dodoria now and thinks his time on Earth really wasn’t a waste. But then he wonders what Dodoria had said about chasing Earthlings, and remembers feeling two large powers a ways off earlier. Vegeta decides that he should go investigate, since he can’t have anyone interfering, and flies off. Meanwhile, Gohan, Kuririn, and the kid keep flying towards the cave where Bulma is, but then they feel something really fast coming. They hurry and swoop down to an island and hide, and Kuririn wonders how that bastard knows where they are without that device. Vegeta then flies into the area, and says the two powers have vanished, and looks around some more.

Gohan looks up and points out to Kuririn that Vegeta is up there, and they all duck and freak out. Vegeta then moves out of their line of sight, and they’re relieved he’s still searching for them. Kuririn wonders how he could find them without a scouter, as Vegeta gets pissed and wonders if he was mistaken. He thinks he still hasn’t mastered this “power seeking technique” yet, and wishes he hadn’t broken his scouter after all. Then he feels something, as Kuririn realizes he must be able to feel ki. Kuririn freaks out, because even if they hide their ki, there’s still this kid’s small ki. Vegeta does feel a small power, and says it’s no mistake this time. Vegeta then flies in towards them and Kuririn thinks it’s all over.

But then a giant fish jumps out of the water, and Vegeta thinks that’s who it was. He decides to go find the remaining two Dragon Balls… no, just one, so Freeza won’t be able to get all seven. Then he’ll take Freeza’s five, he says to himself as he flies off. Kuririn and Gohan relax and try to catch their breath. Kuririn says he thought it was all over, but for now they should go back to Bulma’s place. He really wants to rest even though he didn’t fight. They all hop across to another island, and they walk along until they come to Bulma’s cave. She’s not in the opening, so they decide to go into the cave and see.

They soon find a huge capsule house in the back of the cave, and Bulma comes out and yells at them for being all carefree out there and leaving a young girl in here by herself. Then she spots the “tiny Piccolo-looking kid” and asks if he’s a Namekian. She asks why he’s here, and Kuririn says they should go inside first. And then Bulma remembers to tell them that she got a great message from Goku — he’ll be here in six days! She explains how he got the ship, and that he’s getting incredible training along the way here. They all get excited and dance around, as Goku continues training in his ship. 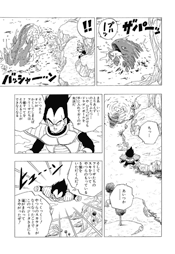 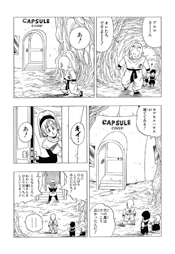 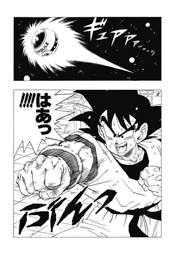