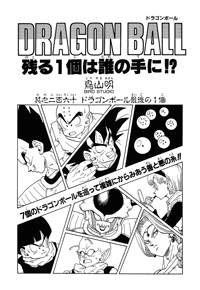 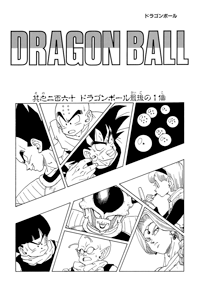 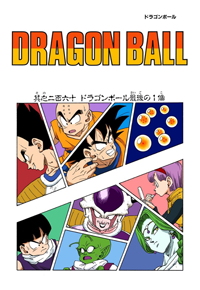 Vegeta tosses his Dragon Ball into the lake next to the village, so that nobody will know where to find it, except him. He then wonders what to do next. Freeza has five and is searching for the remaining one. Vegeta then flies off thinking. Meanwhile, Freeza, Zarbon, and the only remaining henchman are still waiting on Dodoria, thinking he’s still chasing those little guys. Freeza thinks Dodoria was an idiot, and they should just go search for the remaining two Dragon Balls. Zarbon and the other henchman will go look for the last two villages, and Freeza will go back to their ship with the five Dragon Balls they have so far. Zarbon and the henchman drop their Dragon Balls to the ground, then take to the air. Zarbon tells the other henchman to search that way, but notify him if he finds the village, so that he won’t get killed by the stronger Namekians. No matter what, they’ll return to the ship in three hours. Then they both fly off.

Freeza thinks that Vegeta is probably already searching himself, and is sure to come after the Dragon Balls they already have. And when Vegeta does come, they’ll just take the two he has, and have all seven. Freeza lifts the five Dragon Balls off the ground telekinetically, and zooms off with them in his pod. Back at the cave, Bulma asks Dende about this Eldest, and Dende says he was the person who gave birth to all of the Namekians here. He was the only person who survived the unusual weather, and he repopulated the planet afterwards. “I’m the 108th child of the Eldest.” Bulma asks how he could’ve given birth if he was the only one, and Dende says by producing eggs from his mouth. Bulma says that’s really different, and thinks this Eldest must be a woman. Dende then asks what a “woman” is. Bulma asks if there aren’t two types of Namekians, man and woman, like his mother and father for example. Dende doesn’t understand this “two type” thing at all. Bulma thinks this is a boring planet if it doesn’t have men or women.

Kuririn changes the subject and wants to know why they should go to see the Eldest (as Bulma says she’s glad she’s not a Namekian). “Ah! The people who attacked our village already have four Dragon Balls… And then, now you’ve said a lot of people are being killed in that direction, right?” Kuririn says yeah, it was probably Vegeta, and Gohan says there’s no one left, they’ve been wiped out. Dende says that means there’s hardly anyone remaining on this planet now. Kuririn says that Vegeta must have the Dragon Ball from the village he attacked, meaning there’s only one left. Kuririn asks if the last Dragon Ball is being held by the Eldest, and Dende says it is. Kuririn freaks out, because even though Freeza’s troops no longer have scouters, Vegeta can detect ki, and so he’ll probably be after the seventh Dragon Ball there. Dende cries and says they must hurry then, and Kuririn agrees, because they can’t let Freeza or Vegeta be granted eternal life. Kuririn says he’ll go, and asks Gohan to stay with Bulma. It’s dangerous if too many of them go.

Kuririn asks Dende how long it would take them to get there walking, so as not to be noticed by Vegeta. Dende says it’s about thirty days walking, and Kuririn says that’s no good at all, so they’ll have to fly. They’ll just have to hide again if Vegeta notices them. So Dende and Kuririn fly off, and tell Bulma and Gohan to be careful. Kuririn thinks about how strong Freeza and Vegeta are along the way, and thinks they’ll just hide with the Eldest’s Dragon Ball for the five and a half days it will take Goku to get there. Speaking of whom, Goku is flying through space doing flips and throwing punches in his ship. He’s exhausted, but thinks he should move up to 30G now, when Kaiō-sama contacts him. He asks Goku if he’s in space, but remembers that he should be on his way to Planet Namek, and thinks it’ll be good if he finds the Dragon Balls there. Goku can’t believe Kaiō-sama didn’t know that, and says there’s bad stuff happening on Planet Namek. Kaiō-sama says to tell him later, he has good news first. He has guests here. There are four guests, and they’ve cleared Serpent Road in a much shorter time than Goku did. Four people he knows well. They’ve come here for stern training like Goku did. Tenshinhan, Chiaotzu, Piccolo, and Yamcha! 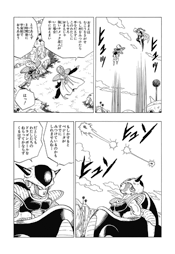 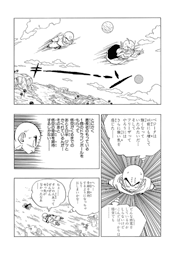 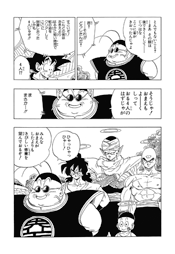