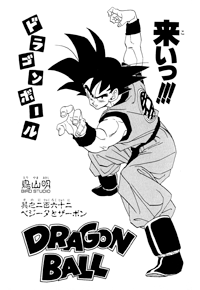 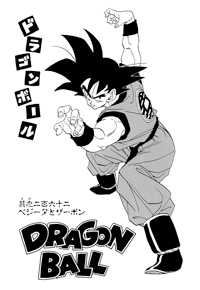 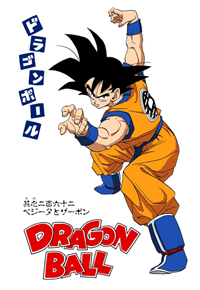 Zarbon can’t believe he killed Dodoria, and Vegeta says he’ll make him believe. Zarbon asks Vegeta why he’s defying Freeza, and so he explains about not liking taking orders from him and how he wants eternal life for himself. If he had eternal life, his chances of winning against Freeza would increase. Zarbon tells him eternal life wouldn’t be enough to win against Freeza. Vegeta says it’s a shame Zarbon doesn’t have a scouter, because his power has gone up to unimaginable levels. Zarbon says he doesn’t know where Vegeta stands, but he knows Freeza has far transcended him. Vegeta says to cut the crap, the talking is over. He tells Zarbon that Dodoria said Freeza was scared of the Saiyan. So he’ll show him that Saiyan power he was afraid of.

Zarbon says Freeza was scared of the ones who’d conspired together, not just one. This just makes Vegeta smirk, and he disappears, reappearing next to Zarbon. Zarbon punches at him, but Vegeta catches his fist, then throws him up further into the air. Zarbon catches himself, though, and fires a huge blast down towards Vegeta. Vegeta waits for it and swats the blast off to the side, causing a huge explosion off in the distance. Kuririn and Dende aren’t too far from the explosion, and Kuririn notes that two awesome ki (Vegeta and someone) are fighting. He knows that someone was with Freeza, though.

Kuririn gets pissed that he can’t contend with them and hopes they really beat each other up. He grabs Dende and says to hold on tight, then flies off. He says this is their chance, while Vegeta’s busy fighting they’ll hurry up to the Eldest’s place. Meanwhile, Vegeta elbows Zarbon in the face, then Zarbon kicks at him, but Vegeta dodges it. Vegeta does a mid-air back flip and kicks Zarbon off into the distance, and flies after him. Zarbon lands on the ground, but Vegeta is right behind him, and kicks him across the ground. Zarbon stands back up, and tells Vegeta he’s improved. “But, it’s your fault… You’ve awoken my true power that’s been sleeping for a long time…” 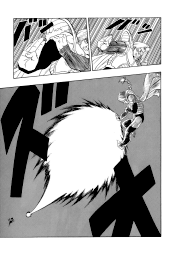 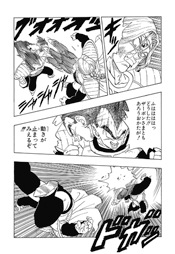 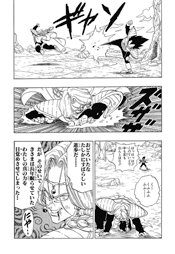