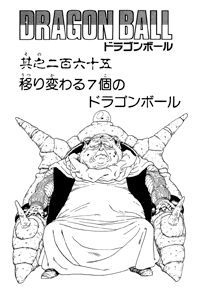 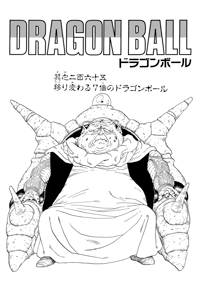 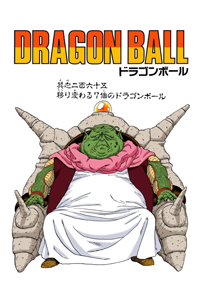 The Eldest says that because of those villains, almost all of the children have been killed. And he is aware that they’re after the Dragon Balls. One needs proof of wisdom and strength on Planet Namek to receive the Dragon Balls, and he can’t believe the balls of hope would be used for such bad things. Kuririn says to be quite frank, he wants to know if he can’t have the ball above his head. (The One-Star Ball is sitting on top of the Eldest’s chair.) Kuririn promises he won’t let the bad guys have it. Dende thinks Kuririn should be allowed to have it as well, so their Earth Dragon Balls can be revived. The Eldest can’t believe there are also Dragon Balls on Earth, and asks if there’s a Namekian there. Kuririn explains that he had escaped to Earth when this planet was in danger. The Eldest realizes it was Katattsu’s kid, and is surprised that the young child was able to survive on his own. “Certainly that kid was a child prodigy of the dragon clan who can produce Dragon Balls…”

The Eldest says that genius must’ve died, or at least he was killed? Kuririn says he was killed, by Vegeta, the Saiyan who came here. The Eldest asks if the Saiyan who did in the dragon clan genius was a Super Saiyan. Kuririn doesn’t know what he’s talking about, and the Eldest asks him to come a bit closer so he can search his past a little. He puts his hand atop Kuririn’s head, and begins searching his thoughts. He soon realizes that genius had split himself in half, and thus halved his power. He tells Kuririn his wish is a genuine one, and takes down the One-Star Ball, handing it to him. He says they might not be able to make the wish, though, and Kuririn asks why. The Eldest explains that he only has a few days left to live, and when he dies, the Dragon Balls will disappear. At least the bad guys can’t use them either, though. Kuririn then swears he’ll protect this ball with his life, and keep them from being granted eternal life. The Eldest tells him to please do so, since he can’t even move anymore, and he doubts even Nail would be able to protect him if Freeza came here.

Then the Eldest tells Kuririn he has a lot of power for an Earthling. However, he still has some more sleeping power, and he’d like to bring it out for him. The Eldest puts his hand on Kuririn’s head and Kuririn thinks about the idea of getting a power up without even training. He gets really excited with all of this new power flowing through him all of a sudden, saying he feels like he was reborn. He thanks the Eldest, and asks if it wouldn’t be too much trouble to bring out the sleeping power in a little kid, or would it shorten his lifespan? The Eldest says it would be no trouble at all, since it’s not connected to his lifespan. Then Kuririn asks if he could bring one more friend, and the Eldest says yeah, as you can never have too many strong good guys. Kuririn says he’s leaving immediately, but then asks what to do with this Dragon Ball. The Eldest says to hold onto it, since the future lies in their hands. Kuririn tells Dende to wait here, and says he’ll be back with Gohan soon. Then Kuririn zooms off back towards the cave.

Meanwhile, back at the cave, Gohan and Bulma are outside of it and Bulma looks at the Dragon Radar and calls Gohan over. She says the Dragon Ball over there has started moving, and it’s coming towards them. So Kuririn must have it and be on his way back. Then they spot another Dragon Ball, separate from Kuririn’s one and Freeza’s five. Gohan looks over towards that direction, and realize it’s the one from the village Vegeta attacked. But, he doesn’t feel Vegeta’s ki there anymore. Bulma thinks that he must’ve attacked the village and been unable to find the Dragon Ball, and so he left. Gohan asks her for the radar so he can go find it, and then flies off towards the village. Back at Freeza’s ship, Vegeta is recovering in a healing machine. Zarbon and Appule are watching over him, and Zarbon leaves to go update Freeza. Appule walks up to the tank and starts mocking Vegeta, when Vegeta suddenly opens his eyes, and blasts through the glass of the tank, killing Appule. Zarbon and Freeza hear the noise, and run back towards the room. They spot a hole through the wall of the ship, and think he’s escaped. However, it was just a decoy and Vegeta runs off through the ship and finds the room with the Dragon Balls. 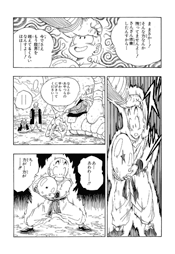 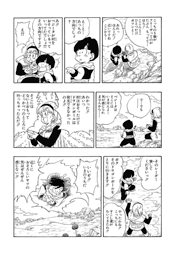 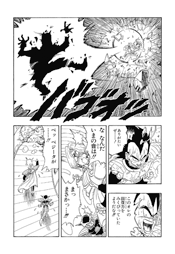