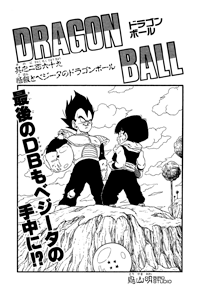 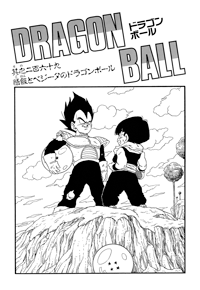 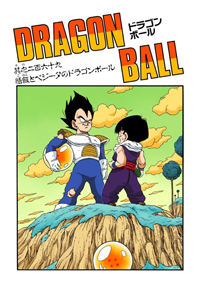 Gohan to Bejīta no Doragon Bōru

Bulma can’t believe how Kuririn just handed over the Dragon Ball after all that trouble, and says it’s all over if Vegeta gets the last one. Kuririn says it was either that or be killed, and they should be okay since Gohan went to find that other Dragon Ball. Hopefully he’ll manage to keep it away from the bad guys. Bulma then realizes that Gohan is probably on his way back with the Dragon Ball right now, and Kuririn hopes Vegeta doesn’t find him. Speaking of whom, Gohan is flying through the air with the four-star ball, and he feels Vegeta heading his way. So, Gohan swoops down to an island and ducks behind a small rock with the Dragon Ball. Vegeta notices him before Gohan can hide his ki, and starts yelling at whoever it is to show themself before he blows the whole area up. Gohan yells to wait, sets the Dragon Ball down, and climbs up to the top of the rock.

Vegeta hadn’t expected to see Kakarrot’s son in a place like this. Gohan notices Vegeta has a Dragon Ball and freaks out, while Vegeta says it was a present from his slippery-headed friend. Gohan assumes that Vegeta has killed Kuririn, but Vegeta says he hasn’t, though he can always go back and do so if that’s what Gohan wants. Vegeta tells Gohan to be thankful that he’s in a good mood after having obtained all the Dragon Balls. Vegeta then lands down on the rock in front of Gohan and asks what he has in his hand. Gohan nervously says it’s a clock, and Vegeta laughs at how the Earthlings had the technology to reach Namek, yet can’t manage to make a more compact clock. Vegeta asks if Kakarrot is also here on Namek, and Gohan says no, because they didn’t know all these evil people would be here. Vegeta says that’s too bad. “The three of us are the last three Saiyan. When you get back to Earth, I need you to tell Kakarrot something for me.” Vegeta then knees Gohan in the stomach, and flies off laughing. As he struggles back to his feet, Gohan says that the kick hurt, but at least the Dragon Ball is okay.

Back at the cave, Bulma tells Kuririn that she’s turned the house back into a capsule, and asks if Gohan has returned yet. Since Vegeta knows where they are, they plan on changing locations immediately. Gohan then flies in, and they’re all excited that he has the Dragon Ball. Kuririn says that he’ll fill Gohan in on what’s happened later, but Gohan says he already knows everything, and explains about what happened between him and Vegeta. Kuririn says he was lucky Vegeta didn’t find the Dragon Ball. Meanwhile, Vegeta is swimming around in the lake near the village he attacked, laughing about how the whole universe will be his. But then he doesn’t see the Dragon Ball, and finally realizes it’s gone. He then realizes that the spot where he ran into Gohan was right between here and the place where the other Earthlings were. He wonders how Gohan could’ve found the ball, and then realizes that the object Gohan was carrying wasn’t a clock after all.

Vegeta flies up out of the water, quite irate to say the least. Eventually he makes it back to the cave, but Gohan and co. have already left. He flies up through the roof of the cave, and checks the surrounding area, but he can’t feel their ki anywhere. He decides he’ll take care of them when they come after his six Dragon Balls. The good guys are now on an island, in a little space between two large rock formations. Bulma’s mad that there’s no room to put the house in here, but Kuririn says it was the only way. Bulma asks him what she’s supposed to do without a bathroom until Goku arrives, and Kuririn says not to worry about that, since he’s going to bring Gohan to the Eldest’s place right now. Gohan asks why, and Bulma can’t believe they’re leaving her alone in a place like this. Kuririn says to be patient, because he thinks if Gohan meets the Eldest, he might become strong enough to contend with Vegeta. 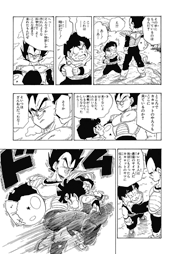 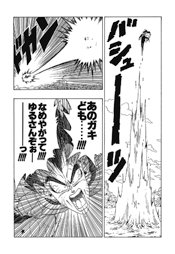 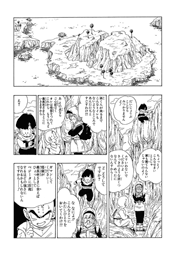